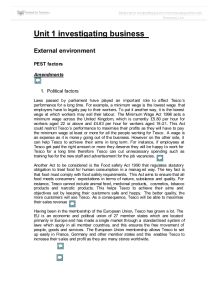 Unit 1 investigating business External environment PEST factors Amendments 1. Political factors Laws passed by parliament have played an important role to affect Tesco's performance for a long time. For example, a minimum wage is the lowest wage that employers have to legally pay to their workers. To put it another way, it is the lowest wage at which workers may sell their labour. The Minimum Wage Act 1998 sets a minimum wage across the United Kingdom, which is currently �5.80 per hour for workers aged 22 or above and �4.83 per hour for workers aged 18-21. This Act could restrict Tesco's performance to maximise their profits as they will have to pay the minimum wage at least or more for all the people working for Tesco. A wage is an expense as it is money going out of the business. However on the other side, it can help Tesco to achieve their aims in long term. For instance, if employees at Tesco get paid the right amount or more they deserve they will be happy to work for Tesco for a long time therefore Tesco can cut unnecessary spending such as training fee for the new staff and advertisement for the job vacancies. ...read more.

Therefore there will be an increase in Tesco's sales inevitably. Another factor that I have been keen to talk is the income tax. It is a tax levied on the income of individuals or businesses. High income tax means people have less money to spend on expensive goods at Tesco as tax is an expense. On the contrary, when the income tax is low, people tend to spend more on goods and services on Tesco as they would have more disposable income. As a result, this helps Tesco to achieve their aims of maximising profits and survive in the competition. 3. Social factors There has been a rapid demand for organics/GM-free foods in recent years. Organic foods are made in a way that limits the use of synthetic materials during production. This method resulted in higher levels of nutrition and consumers may choose to buy organic food because they believe them to be more nutritious than other food. In addition to organic food, it was found that consumers want lower-fat and healthier foods. As the social trend says, world organic food sales jumped from US $23 billion in 2002 to $52 billion in 2008 and the world organic market has been growing by 20% a year since the early 1990s. ...read more.

There has been a rapid growth in the global coordination and big firms are amalgamating to achieve the common aims and objectives. Products are becoming technologically advance such as high-definition televisions and 3D televisions invented by Samsung for the first time. By selling the latest technologically advanced DVD recorders and high-definition televisions, Tesco can capture market share from rival firms. Moreover, as those advanced technologies cost a lot, it is a good opportunity for Tesco to maximise their sales and at the same time they can meet customers' needs by offering the new models. CCTV and security systems have played a key role in helping Tesco to reach their goals. CCTV stands for closed circuit television and is the use of video cameras to transmit a signal to a specific place. It is often used for surveillance purpose in areas that may need monitoring. Surveillance of the customers using CCTV is particularly common in the UK where there are reportedly more cameras per person than in any other country in the world. This will be a great help to Tesco to satisfy customer needs as people would like to shop in a pleasant and safe place. ?? ?? ?? ?? Heemang Lee ...read more.

The writer has made some good points but ignored several significant PEST factors. It would benefit from an opening and closing paragraph