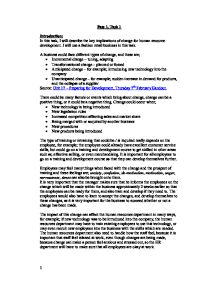 Pass 1, Task 1 Introduction; In this task, I will describe the key implications of change for human resource development. I will use a fashion retail business in this task. A business could face different types of change, and these are; * Incremental change - tuning, adapting * Transformational change - planned or forced * Anticipated change - for example; introducing new technology into the company * Unanticipated change - for example; sudden increase in demand for products, and the collapse of a supplier Source: Unit 17 - Preparing for Development, Thursday 7th February Handout. There could be many factors or events which bring about change, change can be a positive thing, or it could be a negative thing. Change could occur when; * New technology is being introduced * New legislation rules * Increased competition affecting sales and market share * Being merged with or acquired by another business * New procedures * New products being introduced The type of training or retraining that could be / is required really depends on the employee, for example; the employee could already have excellent customer service skills, but could go on a training and development course to get skilled in other areas such as; effective selling, or even merchandising. ...read more.

New technology (hardware or software) being introduced/imposed: New technology could be introduced into the company, and this could have a huge impact on current employees because they would have to implement to change, they would have to learn how to use the new technology and this will take some time because it is important that everyone within the business / store knows how to use it effectively. New types of technology could include; computers, walkie-talkies, and lifts. For example; if the retail store merged with another business, they would have to expand and make the store bigger, for example; the building can have 2 floors, and this is where the lift comes in, it can be used by members of staff if they need to go to the stockroom / offices. New legislation: Legislation factors can have a huge impact on the way a business develops itself. For example; if new legislation rules were introduced into a company, then the employees would have to change to implement these changes. It is likely that the employees are trained on implementing the new legislation change, as it is important that they go by this and not break the businesses rules. ...read more.

Again change can be a positive thing, or it can be a negative thing, the two companies could have been merged together to make one big business, or this change could have been forced upon them somehow, but this doesn't matter, what matters is that all employees get on well with each-other, because if they do not their will be conflict within the business, and this isn't good, because then products will not be sold effectively and efficiently. New procedures: New procedures are very common in a business, a new procedure could mean anything, for example; a new fire alarm system being fitted in, this is a big change and could affect employees in many ways, such as; getting used to it, and would have to implement to these changes. New products: If the business wasn't doing very well, a new product would have to be introduced, to attract customers, and also make more money. Product development could take place, and what this means is getting a product from the store and developing it. For example, a Samsung YP-K3 is similar to the Apple iPod in many ways, except for the fact that the Samsung is touch-screen. ?? ?? ?? ?? 1 ...read more.