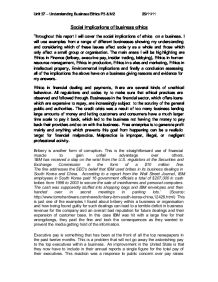 Social implications of business ethics. The main areas I will be highlighting are Ethics in Finance (bribery, executive pay, insider trading, lobbying), Ethics in human resource management, Ethics in production, Ethics in sales and marketing, Ethics in i

Social Implications of business ethics Throughout this report I will cover the social implications of ethics on a business. I will use examples from a range of different businesses showing my understanding and considering which of these issues affect society as a whole and those which only affect a small group or organisation. The main areas I will be highlighting are Ethics in Finance (bribery, executive pay, insider trading, lobbying), Ethics in human resource management, Ethics in production, Ethics in sales and marketing, Ethics in intellectual property, Environmental implications and finally a conclusion assessing all of the implications the above have on a business giving reasons and evidence for my answers. Ethics in financial dealing and payments, there are several kinds of unethical behaviour. All regulations and codes try to make sure that ethical practices are observed and followed through. Businesses in the financial sector, which offers loans which are expensive to repay, are increasingly subject to the scrutiny of the general public and authorities. The credit crisis was a result of too many business lending large amounts of money and letting customers and consumers have a much larger time scale to pay it back, which led to the business not having the money to pay back their providers and so on with the business. Free enterprise is to generate profit mainly and anything which prevents this goal from happening can be a realistic target for financial malpractice. Malpractice is improper, illegal, or negligent professional activity. Bribery is another form of corruption. This is the straightforward use of financial muscle to gain unfair advantage over others. 'IBM has received a slap on the wrist from the U.S. ...read more.

Whistleblowers are being deliberately undermined or removed from their workplace, despite repeated promises to protect them.' (Source: http://www.guardian.co.uk/money/2010/mar/22/tenfold-rise-whistleblower-cases-tribunal) This newspaper article just shows how within the workplace over the last few years it has become increasingly tense and confusing what can be said to each other and what information can be shared with other employees. When someone may be just mentioning something they think is suitable and appropriate for all ears they later find out they are being laid off by the business for as they know it 'whistleblowing'. Ethics in production of goods can lead to ethical problems for a company and their overall reputation and outlook. British law requires that any drug which is being introduced to the market has been tested on at least two different species of living mammal. One has to be a large non-rodent. The Animals Act 1986 insists that no animal experiments should be conducted if there is a realistic and viable alternative. The ethical question which revolves around animal testing is whether or not the general value of human life is more important in relation to animals. Another question raised is the extent of the pain which animals suffer throughout the procedures. People's opinions on animal testing differs, some are ok with it if it is for valid medical reasons and tests are done ethically, others refuse to accept animal testing altogether. In many cases when animal testing is done it is done when it is unnecessary, for example done when they know a certain ingredient will cause harm, when they know a certain ingredient will kill or harm the animal being tested upon, when the product is nowhere near being released, on large numbers of animals when it is not a necessary product, or when it is simply not required. ...read more.

These men who were jailed for the creation of pirate bay distributed millions of film and music files to users worldwide without paying for any of them. Environmental implications have a huge influence on a business these days. The most serious threat facing us comes from climate changes caused by human activity. One of the most major problems today is that economic activity is growing quickly in different areas spreads across the world. When a business is putting together new ideas and ways of developing already existing products they have to make sure that they are following all of the future aims for sustainability and reducing the use of greenhouse gases used in today's climate. The factory creating the product to the final sale stage to the consumer has to be viable and correct for future environmental expansion. This can also be directly linked to the suppliers and employees used such as how they are getting to work and transferring the products around the country or world. Many consumers and businesses will only work with people who have these aims and objectives set out clearly with a good positive direction for the overall reputation on the world and affect it can have. 'The software drinks giant has come up with a technology to use plant material in plastic bottles. But it is not an easy task.' (Source: http://www.guardian.co.uk/sustainable-business/coca-cola-green-plant-bottles) This shows how major companies are trying to create new initiative for being more green and helping towards using less harmful products for the environment. This type of movement means that many pressure groups that are out to harm businesses get on their side which is always good for consumer base and media attention. ?? ?? ?? ?? Unit 37 - Understanding Business Ethics P3 & M2 25/11/11 ...read more.