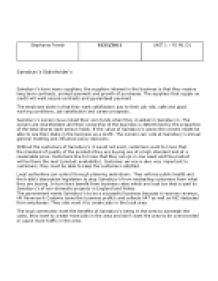 Stakeholders in Sainsburys and the National Trust

﻿Stakeholders Stephanie French 9/25/2011 UNIT 1 ? P2 M1 D1 Sainsbury?s Stakeholder?s Sainsbury?s have many suppliers, the suppliers interest in the business is that they receive long term contracts, prompt payment and growth of purchases. The suppliers that supply on credit will want secure contracts and guaranteed payment. The employee stake is that they want satisfactory pay to their job role, safe and good working conditions, job satisfaction and career prospects. Sainsbury?s owners have risked their own funds when they invested in Sainsbury?s. The owners are shareholders and their ownership of the business is determined by the proportion of the total shares each person holds. If the value of Sainsbury?s grows the owners might be able to see their stake in the business as a profit. The owners can vote at Sainsbury?s annual general meeting and influence policy decisions. Without the customers of Sainsbury?s it would not exist, customers want to know that the standard of quality of the products they are buying are of a high standard and at a reasonable price. Customers like to know that they can go in one week and the product will be there the next (product availability). Customer service is also very important to customers; they must be able to keep the customers satisfied. Local authorities can control through planning restrictions. ...read more.

It?s ridiculous it?s not like we need any more supermarkets anyway?. The local community view on the plan of the new Sainsbury?s have said that the benefits outweigh the costs, it will create more jobs in the area as it has quite a high number of unemployment. It could drive the community forward creating 350 more jobs. This would also tie in with the government?s aims to return people back into employment rather than people stuck within the benefit system. One of Sainsbury?s objectives is to use produce from local farms within a 30 mile radius giving local farmers direct route to market possibility to long term growth and more jobs within the agricultural sector. Mark Watkins said that ?this is great business has been a struggle recently and the thought of becoming a local supplier for Sainsbury?s is exciting it could mean I can keep the farm as I haven?t been able to keep up with the payments as business has been so bad? The local suppliers would benefit from the construction of a new Sainsbury?s site as it would create more jobs especially because of the recent economic struggles within the agricultural sector. The current employees of Antony House for The National Trust are becoming increasingly alarmed over the possible construction and locality of the new Sainsbury?s store Sara Clark said upon interview ?Who will want have a daycation to Antony house with that being built over there it ruins everything we are about, it will put loads of us out of jobs. ...read more.

The petition states that I believe that the planning system should balance future prosperity with the needs of people and places - therefore I support the National Trust's calls on the Government to stop and rethink its planning reforms. The Prime Minister David Cameron wrote a letter to Fiona Reynolds "I believe that sustainable development has environmental and social dimensions as well as an economic dimension, and we fully recognise the need for a balance between the three. Indeed, the purpose of the planning system as a whole, and of our proposals for it, is to achieve such a balance." In which she commented back saying "We will now do everything in our power to help shape the National Planning Policy Framework into a robust system which enables the people making the decisions to guide good development to the right places. Planning Minister Greg Clark has invited us to work with him to ensure the detail of the document reflects this brief, and we are keen to do so. My sources for this article have been from www.planningforpeople.org.uk which I believe is a very valid source of evidence as they cannot start a campaign against the government with not reliable evidence. Ive also was reading information from the telegraph hands of our hand campaign. They have a lot of articles with information about the governments NPPF and although most of their information is bias as they have a campaign against the NPPF it is reliable because they are not allowed to publish untrue information. ...read more.