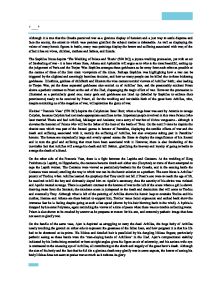 Vase painters were only interested in glorifying warAlthough it is true that the Greeks perceived war as a glorious display of heroism and a just way to settle disputes and face the enemy, the extent to which vase painters glorified the sub

'Vase painters were only interested in glorifying war' Although it is true that the Greeks perceived war as a glorious display of heroism and a just way to settle disputes and face the enemy, the extent to which vase painters glorified the subject matter is debateable. As well as displaying the valour of many heroic figures in battle, many vase paintings display the horror and suffering associated with war; of the effect it has on wives, children, mothers and fathers, and friends. The Sophilos Dinos depicts 'The Wedding of Peleus and Thetis' (580 BC); a joyous wedding procession, yet with an air of foreboding of war - it is here where Hera, Athena and Aphrodite will argue as to who is the most beautiful, setting up the judgement of Paris and the Trojan War. Sophilos arranges these goddesses as far away from each other as possible at the centres of three of the four main viewpoints of the dinos. Perhaps Sophilos was highlighting how a war can be triggered by the slightest and seemingly harmless decision, and how so many people can be killed due to three bickering goddesses. Eileithuia, goddess of childbirth and Kheiron the wise centaur remind viewers of Achilles' birth; also leading to Trojan War, yet the three separated goddesses also remind us of Achilles' fate, and the presumably exultant Priam shows a pathetic contrast to Priam at the end of the Iliad, disparaging the tragic effect of war. ...read more.

The line is completed by the shapes of the shields, bringing our eyes back into the composition. In addition, the rest of the vase is painted black, leaving only the frieze of Achilles of Ajax for our eyes to be drawn to. These two warriors are shown taking a respite from their battles. Rather than focusing on the battles to come, Exekias here captures the more human moment of two warriors at rest, trying to take their minds off their worries of what is soon to come; either glorifying the intelligence and skill needed to be successful in battle (Achilles has the higher roll of 'four' displaying his superiority), or possibly emphasising how war was in fact just a game and should not be glorified. However, many vase painters chose not to depict war in their work. The Gorgon Painter's 'Gorgons Pursuing Perseus' (600-590 BC) is a representation of a mythological chase of Perseus by Medusa's immortal sisters as he beheaded Medusa. The Amasis Painter created the neck amphora 'Dionysus and Two Maenads' (550 - 530 BC) - The body of the vase is adorned with repetitive patterns; the rays at the foot, the intricate lotus bud chains, ivy branches the maenads hold as well as the maenads themselves who are almost identical and parallel to each other. Exekias' 'Dionysus Sailing' (540-530 BC) ...read more.

A Trojan woman crouches beneath a battered palm tree (bent to emphasise the destruction of Troy), tearing her hair out in a gesture of mourning. A second Trojan woman sits next to her covering her head in terror, behind a statue of Athena. The focus of this section is a scene of extreme violence which involves Cassandra, the daughter of Priam. She is being ripped away from the statue, her attacker the Greek hero, Ajax, grabs her by the hair while she implores him with her outstretched palm. The sheer horror of the scene does not glorify war at all; the sacrilegious killings on the altar of Athene are both impious and cruel. In conclusion, it is true that many Greek vase painters did explore the glories of war and depicted the heroism of figures such as Achilles and Ajax. However, many also explored the opposite end of the spectrum; the horror, suffering, despair and sacrilege associated with war and the destruction it can bring about. Vase painters were interested in portraying the reality of war more so than glorifying it, and some did not even consider the subject at all. It is therefore untrue to say that vase painters were only interested in glorifying war, seeing as many of the vases mentioned do not do so, but convey the inglorious aspects associated with it. ?? ?? ?? ?? 8th October 2011 1 ...read more.