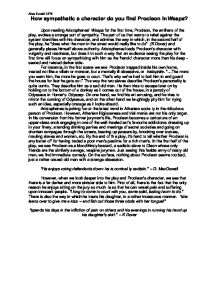 How sympathetic a character do you find Procleon in Wasps?

Alex Ezrati 12*6 How sympathetic a character do you find Procleon in Wasps? Upon reading Aristophanes' Wasps for the first time, Procleon, the antihero of the play, evokes a strange sort of sympathy. The part of us that wants to rebel against the system identifies with his character, and admires the way in which, in the second half of the play, he "does what the man in the street would really like to do" (K Dover) and generally places himself above authority. Aristophanes loads Procleon's character with vulgarity and nastiness, but does it in such a way that an audience seeing the play for the first time will focus on sympathizing with him as the `heroic' character more than his deep-seated and twisted darker side. ...read more.

On one hand, we find his wit amusing, and he tries to mirror the cunning of Odysseus, and on the other hand we laughingly pity him for trying such an idea, especially onstage as it looks absurd. Aristophanes is poking fun at the latest trend in Athenian society in the ridiculous person of Procleon. However, Athenian litigiousness and trial mania are not his only target. In his conversion from his former juryman's life, Procleon becomes a caricature of an upper-class snob engaging in one of the well-heeled set's favourite addictions: dressing up in your finery, attending drinking parties and meetings of secret societies and going on drunken rampages through the streets, beating up passers by, knocking over statues, mauling slaves and women, etc. ...read more.

"He enjoys voting defendants down: he is comically sadistic." - D. MacDowell However, when we look deeper into the play and Procleon's character, we see that there is a far darker and more sinister side to him. First of all, there is the fact that the only reason he enjoys sitting on the jury so much is so that he can wreak pain and suffering upon innocent people. "I long to come to court with you, some solid, lasting harm to do." There is also the way in which he treats his daughter, in a rather incestuous manner. "she leans over to give me a kiss - and fish out those three obols with her tongue!" "spends his days in the infliction of pain on others and his evenings in running his hand up his daughter's skirt." - K Dover ...read more.