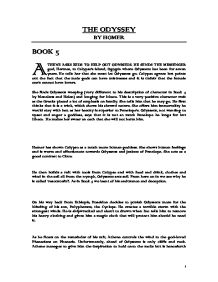 The Odyssey by Homer

THE ODYSSEY BY HOMER BOOK 5 A THENE ASKS ZEUS TO HELP OUT ODYSSEUS. HE SENDS THE MESSENGER god, Hermes, to Calypso's island, Ogygia where Odysseus has been for seven years. He tells her that she must let Odysseus go. Calypso agrees but points out the fact that the male gods can have mistresses and it is unfair that the female one's cannot have lovers. She finds Odysseus weeping (very different to his description of character in Book 4 by Menelaus and Helen) and longing for Ithaca. This is a very positive character trait as the Greeks placed a lot of emphasis on family. She tells him that he may go. He first thinks that it is a trick, which shows his shrewd nature. She offers him immortality he would stay with her, as her beauty is superior to Penelope's. Odysseus, not wanting to upset and anger a goddess, says that it is not so much Penelope he longs for but Ithaca. He makes her swear an oath that she will not harm him. Homer has shown Calypso as a much more human goddess. She shows human feelings and is warm and affectionate towards Odysseus and jealous of Penelope. She acts as a good contrast to Circe. He then builds a raft with tools from Calypso and with food and drink, clothes and wind in the sail all from the nymph, Odysseus sets sail. ...read more.

Homer uses a simile to describe Odysseus as a lion (used in war situation in the 'Iliad' which demonstrates, in this non-warfare situation that the girls viewed Odysseus as a dangerous and wild beast) and Nausicaa and the other girls as sheep. Here, the ravenous lion, buffeted by the elements but striving onward to state his all-consuming hunger on helpless sheep, is compared to the salt-covered Odysseus, ragged from days at sea, and filled with a hunger of an entirely different nature. The relation of the sheep to the girls can be seen clearly in retrospect when the girls flee before this ominous figure of male sexuality as sheep would flee before a hungry lion. This simile does not serve merely to make us once again pity the poor, travel-beaten Odysseus; it is rather an attempt to lighten the tension filling much of the first five books. BOOK 7 W HEN NAUSICAA AND HER FRIENDS HAD REACHED THE PALACE, Athene, disguised as a young girl, offers to lead Odysseus to the palace and places a magical mist around him rendering him invisible in order to evade rude questioning. Athene tell him that in order to speak to King Alcinous, he must first win favour with Queen Arete. When they reach the palace, Athene leaves and buggers off to Athens. Odysseus admires the fine palace then enters, sees Arete and grabs her knees in supplication. ...read more.

Melanthius, a loyal follower of the suitors, knows the power that will be his when Telemachus is eliminated. His own vow, of course, recoils back upon him. Melanthius wishes that Telemachus may suffer death as surely as Odysseus himself has already done so. The irony lies in the fact that Melanthius' vow is fulfilled, only not in the way he had intended. Odysseus himself has not died, and is in fact standing right there. Therefore, as surely as Odysseus has not died, so too will Telemachus not die. Melanthius has unwittingly stated the truth. We see a similar use of irony later, after Antinous strikes Odysseus with the footstool. Only this time, no one specifically mentions the long-lost Odysseus. Instead the suitors remark that Antinous did badly to strike the 'beggar' as he could have been a god testing the suitors' kindness. Of course, we know Odysseus is not a god. But the gods have indeed disguised him fir the very reason that the suitors suggest: to test them and to see which are righteous and which are malevolent. It is also appropriate that Odysseus' disguise makes others liken him once more to a god. Yet this time the situation is reversed. Before, Telemachus thought Odysseus a god for removing his disguise. Now, the suitors consider the possibility due to the lowly appearance of the disguise itself, not because of the majesty with which the gods envelop him when he stands revealed in his true form. 1 ...read more.