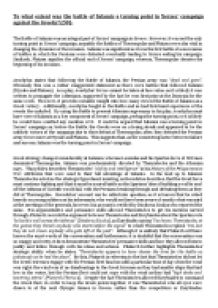 To what extent was the battle of Salamis a turning point in Xerxes' campaign against the Greeks?

﻿To what extent was the battle of Salamis a turning point in Xerxes' campaign against the Greeks? (50)- The Battle of Salamis was an integral part of Xerxes? campaign in Greece. However, it was not the only turning point in Xerxes? campaign, arguably the Battles of Thermopylae and Plataea were also vital in changing the dynamics of the invasion. Salamis was significant as it was the first battle of a succession of battles in which the Persians were defeated, eventually leading to Xerxes ending his campaign. Similarly, Plataea signifies the official end of Xerxes? campaign, whereas, Thermopylae denotes the beginning of his invasion. Aeschylus states that following the Battle of Salamis, the Persian army was ?dead and gone?. Obviously this was a rather exaggerated statement as there were battles that followed Salamis (Mycale and Plataea). As a play, Aeschylus? Persae cannot be taken at face value, as it is likely it was written to propagate the Athenians, supported by the fact he won first prize at the Dionysia for the same work. However, it provides valuable insight into how many viewed the Battle of Salamis as a Greek victory. ...read more.

had smaller ships that laid low in the water, but the Persian fleet could not cope with the wind as they had ?high decks and towering sterns? (Plutarch.Them.14). Despite the fact Themistocles allowed Eurybiades to command the Greek fleet, in order to keep the Greek poleis together, it was Themistocles who all eyes were drawn to at the next Olympic Games in Greece, rather than the competitors or Eurybiades. Furthermore, Plutarch records that the Spartans ?gave Eurybiades a prize for valour, but Themistocles one for wisdom?they also presented him with the finest chariot in the city?. This change in strategy, dominance of the Athenians, as opposed to the Spartans, and the leadership of Themistocles at Salamis, is likely to have contributed to it being a turning point in Xerxes? invasion as it led to ?the greatest fleet in the memory of man [being] conquered? by a small number of ships? (Cornelius Nepos. Them. 5). Thermopylae can be seen as the turning point in Xerxes? campaign because, after the Battle, many more Greek states united together to fight against the Persians in an attempt to emulate Sparta?s valour in their fighting. ...read more.

Plataea is often cited as one of the best examples of Greek unity, and thus a turning point in Xerxes? invasion, as approximately 23 states had taken an oath of comradeship to fight together until the barbarian invaders were destroyed; despite the threats to unity over the three weeks, it was a national alliance, however short-lived. Plutarch outlines the importance of Plataea as a turning point when he records that ?all Greek states should meet at Plataea every year? and that ?festival games should be held every four years?. Overall, it could be suggested that Salamis was the key turning point of Xerxes? invasion as, every battle before it, ended in defeat, whereas, every battle after it, resulted in victory. Furthermore, it ended the Persian strategy of combined naval and military operations and left the Persian army without a supply line. Salamis also weakened the allegiance of the Greeks in Asia Minor and paved the way for the revolt in 479 BC. According to Thucydides, Salamis saved the Peloponnese as ?it prevented the Persians from sailing against the Peloponnese and destroying the cities one by one?. Thermopylae and Plataea, although extremely significant, were not as key as Salamis as turning points in Xerxes? invasion. ...read more.