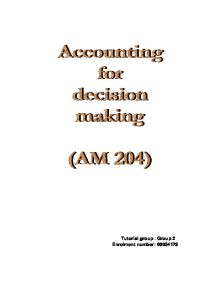 Tutorial group : Group 2 Enrolment number : 00054178 The nature of cost Some characteristics of cost should first be noted. Firstly, costs are not essentially equal to payments. Secondly, costs are in forward-looking manner because it is meaningless looking back to past. The only solution of business problem is to consider 'opportunity cost' or 'alternative cost'. That means the highest alternative net receipt among all other opened alternatives to the business. Materials cost, depreciation and interest on capital are considered as examples of applying opportunity cost concept. In calculating materials cost, either the estimated spent money amount on purchase if materials are not in stock or the purchasing amount paid of the oldest part of stock, the average amount paid, market price at the issued time or the highest amount paid of stock if materials are in stock is taken into account. ...read more.

Based on the opportunity cost concept, depreciation should be considered in resulting from asset value, which is estimated obtainable present value of net receipt from the asset, is sometimes affected by its usage. Depreciation through use, which discusses depreciation as part of opportunity cost, must included in costs calculation because if that output were not produced, certain other receipt would increase. Ignoring depreciation through use, however, the effect on future receipt of change of output will be neglected. Depreciation arises a problem from the fall in asset value, so whether to use machine or not, the present value of future payments and receipts by multiplied with discounting rate should be calculated. But the actual choice will to some subjective extent of the attitude to risk-taking of businessman. ...read more.

Moreover, actual money payments should be dealt with under cost accounting and no connection to manufacturing, so it should be excluded. All we need to consider is the alternative obtainable net receipt if the machine were used on some other jobs. Although the nature of approach discussed to business problems having a close relationship with the decisions making, it is meaningless to classify costs as fixed cost, variable cost because costs may be significant for one decision will be of no importance for others. If figure of average output to be produced is provided, an amendment should be introduced because it is not a marginal cost that is the additional cost of producing one more output unit. However, if marginal costs do not move regularly, several outputs produce maximum profit. It would be suggested that to produce that amount of output when the average costs are at minimum. (550 words) 48 ...read more.