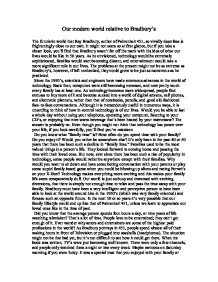 Our modern world relative to Bradbury's.Fahrenheit 451

Our modern world relative to Bradbury's The futuristic world that Ray Bradbury, author of Fahrenheit 451, so vividly describes is frighteningly close to our own. It might not seem so at first glance, but if you take a closer look, you'll find that Bradbury wasn't far off the mark with his idea of what our lives would be like in 50 years. As he envisioned, technology would be extremely sophisticated, families would start becoming distant, and entertainment would take a more significant role in our lives. The problems at the present might not be as extreme as Bradbury's, however, if left unchecked, they could grow to be just as monstrous as he predicted. Since the 1950's, scientists and engineers have made enormous advances in the world of technology. Back then, computers were still becoming common, and now pretty much every family has at least one. As technology becomes more widespread, people find excuses to buy more of it and become sucked into a world of digital screens, cell phones, and electronic planners, rather than that of notebooks, pencils, and good old-fashioned face-to-face conversations. ...read more.

Why would you want to sit down and have some boring conversation with your parents or play some stupid family board game when you could be blowing up aliens and racing Ferrari's on your X-Box? Technology makes everything more exciting and this makes your family life seem comparatively dull. Our world is just so busy and crammed with exciting diversions, that there is simply not enough time to relax and pass the time away with your family. Bradbury must have been a very intelligent and perceptive person to have been able to look at the world around him in the 1950's (which was very family oriented) and foresee such an opposite future. In the next 50 or so years it's very possible that our family lifestyle could end up like that of Fahrenheit 451, unless we learn to appreciate our loved ones like in the time of past. Did you know that the average person spends four hours a day, or nine years of life watching television? That's a lot of time. People love to be entertained; they can't get enough of it. ...read more.

As Bradbury writes in the book, "More cartoons in books. More pictures. The mind drinks less and less." This statement it oh-so true, and it's lucky we still have books; otherwise I think our situation would be extremely close to how Bradbury envisioned it. I think Ray Bradbury sums all this up in a quote from the book: "Life is immediate, the job counts, pleasure lies about after work. Why learn anything save pressing buttons, pulling switches, fitting nuts and bolts?" This shows that people are gradually thinking less and less. They want life to be easy. They want their technology; they want their entertainment. They don't want to be intellectually stimulated. We can still prevent our future from becoming like that of the book. How? The answer is extremely simple: Think. Use your brain for knowledge, not watching TV and playing video games. Read as many books as you can. Pay attention in school. Someday you'll be glad you did. As Isaac Asimov so wisely said, "If knowledge can create problems, it is not through ignorance that we can solve them." ...read more.