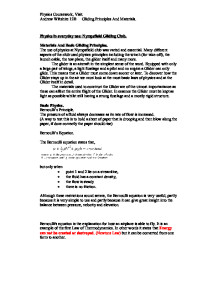 Physics in everyday use: Nympsfield Gliding Club. Materials And Basic Gliding Principles. The use of physics at Nympsfield club was varied and essential. Many different aspects of the club used physics principles including the winch (for take-off), the launch cable, the tow plane, the glider itself and many more. The glider is an aircraft in the simplest sense of the word. Equipped with only a large pair of wings, a light fuselage and a pilot and no engine a Glider can only glide. This means that a Glider must come down sooner or later. To discover how the Glider stays up in the air we must look at the most basic laws of physics and at the Glider itself in detail. The materials used to construct the Glider are of the utmost importantance as these can affect the entire flight of the Glider. In essence the Glider must be kept as light as possible whilst still having a strong fuselage and a mostly rigid structure. Basic Physics. Bernoulli's Principle. The pressure of a fluid always decreases as its rate of flow is increased. (A way to test this is to hold a sheet of paper that is drooping and then blow along the paper, if done correctly the paper should rise) Bernoulli's Equation. The Bernoulli equation states that, but only when * point 1 and 2 lie on a streamline, * the fluid has a constant density, * the flow is steady * there is no friction. ...read more.

Weight shifting also limits the size of aircraft that can be successfully balanced to rather small and lightweight machines. Applying Aerodynamic Principles. To work aircraft wings must alter air pressure. They do this in two ways. First, as they move forward they slice the surrounding air into two layers, one above and one beneath the wings. Both layers are made up of the same number of molecules. If the wing has a curved upper surface, the molecules moving across the top surface have farther to travel than the ones underneath. As they try to maintain their position in relation to the rest of the air molecules, they become spaced farther apart and their speed increases so that when they reach the back edge of the wing, they again match their position with the lower molecules. According to Bernoulli's principle, the faster moving and more widely spaced molecules exert less pressure down-ward than the slower moving and more closely spaced lower molecules do upward, creating a pressure differential. The reduced pressure above the wings creates suctions much like a vacuum cleaner does. The air underneath pushes the wing into the area of reduced pressure and the aircraft is buoyed up as it moves forward, counteracting gravity. (See figure 1) Second, if the leading edge of the wings is raised slightly, allowing air molecules to strike the slanted lower surface, the amount of lift generated can be increased. ...read more.

Great improvement could be achieved by using different airfoil cross-sectional shapes and by reducing waviness in wings, using unbroken polished surfaces, adding rounded fairings, and removing even small gaps and air leaks. Manufacturers used a variety of materials in one machine - wood steel, aluminum, fabric and fiberglass. Warplanes had been made mainly of metal, steel and alloy frames with lightweight riveted aluminum skins, yielding good performance. This is what the Schweizer Company used in their gliders. It proved to be ideal the right weight for Gliders. The Schweizer's produced just the kind of gliders that would be attractive to the growing club market. Most Glider pilots in America (or even Canada) have received their pilot training in a Schweizer glider. It soon became apparent that the added performance of fiberglass ships was advantageous to pilots competing at national and international level and the composite construction techniques introduced by Glasflugel (a German company) were copied by other manufacturers. Those manufacturers who did not adopt fiberglass went out of business. In composite construction the frame is eliminated. Thin layers of strong fibres are molded into the gliders shape infused with resin, and cured. This skin is strong, seamless and smooth. Composite construction is also compatible with CAD (computer aided design), which allows for very precise aerodynamic measurements to be made. Jim Marske used this method for developing a new ultra efficient glider, the Genesis. It is a hybrid design combining concepts from flying wing and regular aircraft. ...read more.