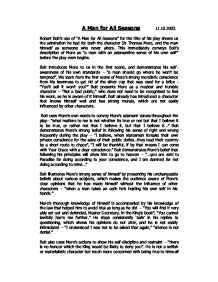 A Man for All Seasons.

A Man for All Seasons 11.10.2003. Robert Bolt's use of "A Man for All Seasons" for the title of his play shows us the admiration he had for both the character Sir Thomas More, and the man himself as someone who never alters. This immediately conveys Bolt's description of More as "a man with an adamantine sense of his own self" before the play even begins. Bolt introduces More to us in the first scene, and demonstrates his self-awareness of his own standards - "a man should go where he won't be tempted". We learn from the first scene of More's strong moralistic conscience from his keenness to get rid of the silver cup that was used for a bribe - "You'll sell it won't you?" Bolt presents More as a modest and humble character - "Not a bad public," who does not need to be recognised to feel his work, as he is aware of it himself. Bolt already has introduced a character that knows himself well and has strong morals, which are not easily influenced by other characters. Bolt uses More's own words to convey More's adamant values throughout the play- "what matters to me is not whether its true or not but that I believe it to be true, or rather not that I believe it, but that I believe it..." ...read more.

This attribute of how steadfast More is, is well respected by the other characters, as he is well spoken of, which demonstrates that he has always been known, even before the issue of Henry's divorce, as a man with unwavering beliefs - "He doesn't know how to be frightened!" "He was the only judge since Cato who didn't accept bribes!" Bolt uses More's relationships with other characters to show how well he knows himself and how passionately he believes in staying true to his conscience. The audience can clearly see how close he is to King Henry as his Chancellor and friend - "you are my friend are you not?" and yet More still will not give his blessing for the divorce to the King as his loyal subject or friend because he does not believe it to be morally right - "Your conscience is your own affair; but you are my Chancellor!" Bolt uses More's relationship with Norfolk to demonstrate how important friendship is to More - "Affection goes as deep in me as you I think," and yet More chooses to follow his conscience rather than the advice of his friends - "you must cease to know me." This emotional scene shows the audience how obedient More is to himself, and how he sacrifices his relationships that are extremely important to him in order to stick to his principles of following his conscience - "I can't give in...you might as well advise a man to change the colour of his eyes". ...read more.

Like water...and if he opens his fingers then - he's unlikely to find himself again. Some men aren't capable of this, but I'd be loathe to think your father one of them." Bolt also makes use of More's appearance to emphasise his loyalty to his sense of right and wrong. More does not change his appearance for anyone, not even the King - "d'you propose to meet the King disguised as a parish clerk?" which demonstrates his unchanging ideology. Also the use of stage direction - "(he has aged and is pale)" shows the stress his stance is causing him, yet he still remains determined - "(his manner though wary is relaxed)." Bolt leaves us with the final impression, as he wrote in the author's preface, that More " knew where he began and left off, what area of himself he could yield to the encroachments of his enemies, and what to the encroachments of those he loved." He displays this by More's comment to the woman he judged before - "if I had to give sentence now I assure you I should not alter it." More's confidence that he is going to heaven assures the audience how strong his faith in God and himself was - "Friend, be not afraid of your office. You send me to God." The audience therefore is left with reminders of More's bravery, understanding of himself and loyalty to his conscience. ...read more.