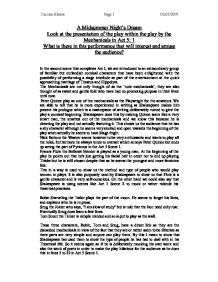 A Midsummer Night's Dream - Look at the presentation of the play within the play by the Mechanicals in Act 5: 1 What is there in this performance that will interest and amuse the audience?

A Midsummer Night's Dream Look at the presentation of the play within the play by the Mechanicals in Act 5: 1 What is there in this performance that will interest and amuse the audience? In the second scene that completes Act I, we are introduced to an extraordinary group of familiar but outlandish comical characters that have been enlightened with the possibility of performing a stage interlude as part of the entertainment at the quick approaching marriage of Theseus and Hippolyta. The Mechanicals are not only thought of as the 'rude mechanicals', they are also thought of as sweet and gentle folk who have had no promoting purpose in their lives until now. Peter Quince play as one of the mechanicals as the Playwright for the amateurs. We are able to tell that he is more experienced in writing as Shakespeare makes him present his prologue which is a masterpiece of writing deliberately ruined to give the play a comical beginning. Shakespeare does this by making Quince seem like a very smart man, the smartest out of the mechanicals and we know this because he is directing the play and not actually featuring it. This shows us the audience that he has a shy character although he seems very excited and open towards the beginning of the play when actually he seems to have Stage fright. Nick Bottom the Weaver seems however to be very enthusiastic and wants to play all the roles, furthermore he always tends to overact which annoys Peter Quince but ends up acting the part of Pyramus in the Act 5 Scene 1. ...read more.

This is also to test the audience's notions and give a first glimpse into the play. This would also seem entertaining as it would amuse the audience to see someone who is very nervous on stage as there actions would change for the worst. At this point it become visible that the more serious the Mechanicals are about the play, the more intent and earnest, the funnier the result is. Peter Quince then continues his prologue with even more haste as to finish it as quickly as he possibly can. The rest of the characters in the play are introduced onto the stage and begin to act out the play with even more hurriedness making it seem like a disaster. This is also ridiculous seeing as this is the prologue which leaves the audience asking why or rather what they are doing. This was part of one of Shakespeare's plans to degrade Quince his character and the rest of the mechanicals and the whole play within a play. This again shows that he has used one of his characters to mock himself as he intends to ridicule bad acting and writing and is not really personally pointed at the play or just at one specific character. Shakespeare did this in order to lead to Pucks ending of the whole play as he says 'If we shadows have offended, Think but this,--and all is mended,-- That you have but slumber'd here While these visions did appear. This shows us that the prologue is first-rate writing from Shakespeare as it is deliberately ruined. ...read more.

Such amusement is that of Pyramus stabbing himself and dying. This is entertaining because although he has stabbed himself and should be dead he continues to talk for awhile and then finally 'dies' showing again bad acting which definitely would get a few laughs if not an uproar meaning it has served its purpose well. Pyramus: Come, tears, confound; Out, sword, and wound The pap of Pyramus: Ay, that left pap, Where heart doth hop:-- Thus die I, thus, thus, thus. Now am I dead, Now am I fled; my soul is in the sky: Tongue, lose thy light! Moon, take thy flight! Now die, die, die, die, die. At the end of the play both Bottom and Flute get up from where they are lying, supposedly dead, and offer to perform an epilogue or a bergamask (a type of dance). Theseus quickly intervenes and tells them they need no epilogue, but rather should only perform the dance, which they do and Puck ends the play. Overall the play within a play is an exciting look into the life of the mechanicals and has a definite dramatic effect on both audience's because of its charm and amusing effects, which too me would have made the audience applause, thus making it a good way to finish the play. This is because it helps break the illusion of the theatre and helps to bring us back down to earth, to the day of the wedding. Thomas Kibata Page 1 02/05/2007 ...read more.