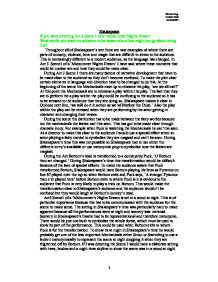 If you were directing Act 3 Scene 1 of a &amp;#145;Midsummer Nights Dream&amp;#146; What would you want the audience to be aware of and hoe might you go about doing this?

Shakespeare If you were directing Act 3 Scene 1 of a 'Midsummer Nights Dream' What would you want the audience to be aware of and hoe might you go about doing this? Throughout all of Shakespeare's text there are vast examples of where there are parts of comedy, violence, love and magic that are difficult to stress to the audience. This is increasingly different to a modern audience, as the language has changed. In Act 3 Scene1 of a 'Midsummer Nights Dream' I have said where these moments that could be unclear are and how they could be made clear. During Act 3 Scene 1 there are many factors of narrative development that have to be made clear to the audience so they don't become confused. To make the plot clear certain elements in language and direction have to be changed to do this. At the beginning of the scene the Mechanicals meet up to rehearse the play, 'are we all met?' At this point the Mechanicals are to rehearse a play within the play. The fact that they are to perform the a play within the play could be confusing to the audience so it has to be stressed to the audience that they are doing so. ...read more.

The audience would find this funny because they think the lady will think its real when a play obviously isn't. These lines have to be said seriously as if Bottom is really trying to make the play better for the audience to find this funny. Bottom solves the problem with the idea of the prologue. He gets his words mixed up and says let the prologue, 'seem to say' that there are no real swords used. This funny not only because Bottom gets his words mixed up but because he is going against the point of a play and saying its not real when it has to be made as real as possible. Quince agrees with the prologue and reply's that it should be, 'written in eight and six'. Bottom then replies to Quince, 'make it two more: let it be written in eight and eight'. This funny firstly because there is no such thing as eight and eight which the audience will know. It is also funny because in Bottom trying to act as if he is a good director by interrupting he makes a fool of himself. This also adds to the comedy when Bottom gets changes into a donkey because the audience already can see from his character he is already a bit of a donkey. ...read more.

Bottom also thinks very highly of himself, even when a fairy Queen loves him he doesn't think that something is wrong but says 'yet...reason and love keep little company together nowadays'. Puck acts a messenger or henchman to Oberon who he is performing deeds from. He seems to mischievous fairy at times when he changes Bottom into a Donkey. He also thinks quite highly of himself because he also thinks he can do a better job than Bottom when Bottom is acting and comments on how poor Bottom is' 'a stranger Pyramus than e'ver played here'. Titania is a very beautiful fairy Queen and is evidently more powerful than other character from Shakespeare's choice of language for her, 'what angel wakes me from my flowery bed?' This language makes her beautiful presence felt and you would need to emphasise this as a director. In conclusion Act 3 Scene 1 is very hard to make clear to the audience because there is so much going on that needs to made clear. The characters during the play have very different personalities and this has to be shown as I have described. This is also made increasingly difficult by the metonymic representation on the stage. Kieran Page Coursework 01/05/2007 1 ...read more.