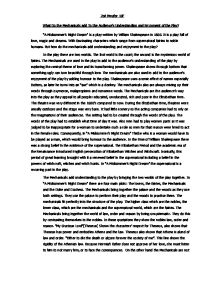 What Do the Mechanicals add To the Audience's Understanding and Enjoyment of the Play?

“A Midsummer’s Night Dream” Is a play written by William Shakespeare in 1600. It is a play full of love, magic and dreams. With fascinating characters which range from supernatural fairies to noble humans. But how do the mechanicals add understanding and enjoyment to the play?

In the play there are two worlds. The first world is the court; the second is the mysterious world of fairies. The Mechanicals are used in the play to add to the audience's understanding of the play by exploring the central theme of love and its transforming power. Shakespeare shows through bottom that something ugly can turn beautiful through love. The mechanicals are also used to add to the audience's enjoyment of the play by adding humour to the play. Shakespeare uses a comic effect of names especially Bottom, as later he turns into an “ass” which is a donkey. The mechanicals also are always mixing up their words through oxymoron, malapropisms and nonsense words. The Mechanicals are the audience’s way into the play as they appeal to all people: educated, uneducated, rich and poor in the Elizabethan time. The theatre was very different in the 1600’s compared to now. During the Elizabethan time, theatres were usually outdoors and the stage was very bare. It had little scenery so the acting companies had to rely on the imaginations of their audiences. The setting had to be created through the words of the play. The words of the play had to establish what time of day it was. Also men had to play women parts as it was judged to be inappropriate for a woman to undertake such a role so men for that reason were hired to act in the female roles. Consequently, in “A Midsummer’s Night Dream” Thisbe who is a woman would have to be played as a man, which would bring humour to the audience. In the time of William Shakespeare there was a strong belief in the existence of the supernatural. The Elizabethan Period and the academic era of the Renaissance introduced English persecution of Elizabethan Witches and Witchcraft. Ironically, this period of great learning brought with it a renewed belief in the supernatural including a belief in the powers of witchcraft, witches and witch hunts. In “A Midsummer’s Night Dream” the supernatural is a recurring part in the play.

The Mechanicals add understanding to the play by bringing the two worlds of the play together. In “A Midsummer’s Night Dream” there are four main plots: The lovers, the fairies, the Mechanicals and the Duke and Duchess. The Mechanicals bring together the palace and the woods as they use both settings. They use the palace to perform their play and the woods to practise there. The mechanicals fit perfectly into the structure of the play. The higher class which are the nobles, the lower class, which are the mechanicals and the supernatural world, which are the fairies. The Mechanicals bring together the world of law, order and reason by being unsystematic. They do this by contrasting themselves to the nobles. In these quotations they show the nobles law, order and reason. "My Gracious Lord"[Theseus] Shows the characters’ respect for Theseus, also shows that Theseus has power and embodies Athens and the law. Theseus also shows that Athens is a land of law and order. "Either to die the death or abjure forever the society of me". This line shows the rigidity of the Athenian law. Because Hermia’s father does not approve of her love, she must listen to him to not marry him, or to face the consequences.  On the other hand the Mechanicals are not as educated as the aristocratic characters. In this quotation it shows a clear contrast between the nobles and the Mechanicals. "What is Pyramus? A lover or a tyrant" [Bottom] I.i.17 This quotation shows the lack of education and shows typical characters for a male lead in the theatre. It shows the lack of education, as this play would have been read in schools, at that time if they were educated. The mechanicals also make the audience understand some of their characteristics " I am to entreat you, request, you and desire you to con them by tomorrow night" [Quince] L.i.78-80 This quotation tells the audience that the Mechanicals are a little bit unreliable.  Additionally, The nobles are a mirror image to the Mechanicals. The Mechanicals are completely opposite to the nobles. The nobles speak in Shakespeare’s elegant verse and are very rich and are also educated. Unlike, the mechanicals that do not speak in elegant verse but in proses and are lower class and are not well educated.

The forest represents magic, instinct, love and dreams. It is symbolised by the fairies' use of rhyming verse, and night. The prosaic Mechanicals here in the forest are another mirror image to the supernatural fairies. The Fairies are elegant; and speak in a four beat verse chant. "So shall all the couples three. Ever true in loving be" However, The Mechanicals are clumsy and earthly and speak in prose. "I, One snout by name, present a wall. The mechanicals add understanding to the audience through love. In the mist of a supernatural war, the humble Bottom demonstrates something about the blind nature of love through his combination of dignity and foolishness." Reason and love keep little company together" Bottom adds understanding to the audience's understanding by this quote. He explains that reason and love have nothing over love Bottom figures this out because he is ordinary, ands proving Theseus wrong.

The Mechanicals' main contribution is humour. This has the effect of diffusing tension.  It grounds down the elevating romance of the lovers and the fairies, and adds to the audience's enjoyment. Shakespeare creates humour through various language techniques.   One way in which he does this is by the comic effects of the names of the characters.  Bottom name might prefer to a person's backside or an "ass" in which his head is turned into the head of an "ass"(donkey) In the play-within-a-play, flute plays Thisbe. The name Flute refers to a flute instrument, which is to a sour fruit “citrus”. This reflects his personality as he is bitter, serious and gets annoyed. High, pitched. In the play Flute has to put on a high voice as he plays a woman. Also Quince name refers

Also the Mechanicals contribute humour by the misuse of their words. The mechanicals mix up their senses a lot in the play. "The flowers of odious savours sweet" an oxymoron is used here as Bottom mixes up his senses. The effect on the audience is obviously humour as it is a stupid mistake. As flowers do not smell horrible! The mechanicals also mix up senses" I see a voice…. And I can hear my Thisbe's face" L187-188 [Bottom] Bottom un-deliberately mixes things up again by saying he sees a voice and hears Thisbe's face. The effect on the audience is humour.

The Mechanicals enhance the audience's understanding of the theme of love and it transforming power. Shakespeare uses humour to show the ugly can be made beautiful though love. ✓" What angel wakes me from my flowery bed…I pray thee, gentle mortal, sing again” As the audience knows, Bottom cant really sing but the fact that love can change something ugly into something beautiful is what the Mechanicals add to the audience's understanding of the play. The contrast of the lazy Bottom and the beautiful Titania with her high status, her language and power underlines the transforming power of love and shows how people behave foolishly because of love. Although Bottom is ugly and uneducated he speaks wise words." Thou art as wise as thou art beautiful" Shows that even though Bottom is ugly and clumsy his wise words about love" Bottom shows the audience that love is unreasonable. The effect on the audience is that love is not about status, beauty or law. Which is what the Athenians believe love is about.

Humour is used to explore the idea of drama and the conventions of the theatre in the play-within-the-play when Quince begins his prologue he takes away the drama and the tension from the play. He does by adding a speech before the play by reminding the audience a few things before the play starts " I am to entreat you, request you are desire you to con them” Quince takes away tension in a humorous by telling the audience before hand that the Mechanicals are a little bit rubbish. Throughout the play-within-the-play Bottom dominates the play but misguides his own talent in many ways. Bottom throughout that play tries to dominate but makes silly while humorous mistakes.  “O grim-looked night…O…O…O” Bottom repetition is entertaining as he is trying to make himself look like a good actor, He is trying to create this impression by using “o” a lot in his sentences. When Shakespeare uses the actors as the setting. Which are the wall and the moon. It shows the contrast of Shakespeare use of imagery to represent the scene, as there were no props and stage settings in those times. Also Flute says his lines all at once as the actors in the Elizabethan times would only know their own lines not the other actors. Which would be very humorous for the audience as the actors would be all jumbled up.

The Mechanicals add enjoyment and understanding through the theme of love and through humour. The Mechanicals also contribute humour. And finally the Mechanicals increase the audience's perceptive of the theme of love and it transforming authority by using Bottom to say something intelligent about love. William Shakespeare uses the Mechanicals in the play for many reasons. Shakespeare uses the mechanicals to add understanding to the audience throughout the play. Also he uses the mechanicals for the audience’s enjoyment. “A Midsummer's Night Dream is still popular for performers and audiences today as it is a play with bizarre and magical dreams and magic happenings thought out the play. Finally, because it is a humorous yet a moral play which anybody can learn from.