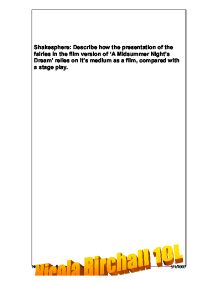 Describe how the presentation of the fairies in the film version of &amp;#145;A Midsummer Night&amp;#146;s Dream&amp;#146; relies on it&amp;#146;s medium as a film, compared with a stage play

Shakesphere: Describe how the presentation of the fairies in the film version of 'A Midsummer Night's Dream' relies on it's medium as a film, compared with a stage play. Having watched the film version of the play 'A Midsummer Night's Dream' it's obvious that the fairies have been presented in a more modern setting than in the play that Shakesphere wrote. Michael Hoffman, the director, set the play in the nineteenth century Italy rather than ancient Greece. The director, Michael Hoffman has made the play more modern to influence the audience. Michael Hoffman has also changed it because he wants the play that he is directing to be 'personalized' and make it more appealing to the modern audience today. Over the years things have been updated. For example. He put bikes in the play, but Shakesphere didn't intend to put bikes in the play because they weren't invented in the time when Shakesphere wrote the play. Michelle Pfeiffer plays Titania who is queen of the fairies and the wife to Oberon. Calitsa Flockheart plays Helena. ...read more.

Although, when reading, an image is produced in the mind. Without this image the story would be boring. The fairies are invisible to the humans. This is because the fairies are only our imagination and a fantasy. Humans can only see the fairies if they have had a magical spell put on them. The audience can see the fairies, so it as the audience have had a magical spell put on them. This is to make them feel more involved with the play. This is emphasized with Nick Bottom who has fallen in love with Titania, queen of the fairies. When bottom is changed to a donkey. He sings, talks and laughs like a donkey. He has no control over himself. This is shown when bottoms clothes are changed to Greek clothes. When the audience is watching the play they have to suspend their disbelief. Fairies are believed to be unreal, a fantasy. Real life humans have never seen fairies. This is why they disbelieve. In the scene where they are having a party in the wood we see the fairies in a un-fairy state. ...read more.

Another special effect that I think is very important is when the flowers in the field turns from being white to red. Another special effect is when wood changes to gold water. This shows us the magic effect. This magical effect is done in-between the fairies and the next scene. When we see the fairies they have horns and wings. There are two types of fairies, a two headed called Janus a roman God and a snake headed one Medusa, which refers to Greek mythology. These refer to Roman and Greek mythology. These would be more obvious to Shakesphere's audience. After watching the film you would think that Shakesphere is trying to create a 'sexy' image and that Shakesphere is just like that. This 'sexy' image is made by the fairies casting love spells. At the end it is confusing to the audience because they don't know what to believe if fairies are real or not. After this confusing ending, it maybe argued that fairies are real. I believe that the film was more interesting than the play. The special effects made the play more interesting and easier to understand. Shakesphere's language isn't spoken anymore, so these special effects make it more appealing to the audience. Nicola Birchall Page 1 5/1/2007 ...read more.