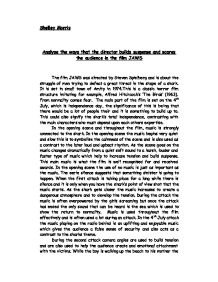 Shelley Morris Analyse the ways that the director builds suspense and scares the audience in the film JAWS The film JAWS was directed by Steven Spielberg and is about the struggle of men trying to defeat a great threat in the shape of a shark. It is set in small town of Amity in 1974.This is a classic horror film structure imitating for example, Alfred Hitchcock's 'The Birds' (1963). From normality comes fear. The main part of the film is set on the 4th July, which is independence day, the significance of this is being that there would be a lot of people their and it is something to build up to. This could also signify the shark's total independence, contrasting with the main characters who must depend upon each others expertise. In the opening scene and throughout the film, music is strongly connected to the shark. In the opening scene the music begins very quiet and slow this is to symbolise the calmness of the scene and is also used as a contrast to the later loud and upbeat rhythm. As the scene goes on the music changes dramatically from a quiet soft sound to a harsh, louder and faster type of music which help to increase tension and build suspense. This main music is what the film is well recognised for and received awards. ...read more.

There is also a great realisation for Brody in this scene as he realises that he was right all along and starts to feel really guilty. At the end of the attack the music quietens and the yellow lilo washes up on shore this is similar to the first attack when the scene ended as normal as it began. It's interesting to note though, that in America's Great Lakes area for several years after 'Jaws' there was a significant drop in the number of swimmers-a case of life imitating art! The director purposely does not show the shark until the main climax of the film to scare the audience. This is very effective because what we do not see we can only imagine and our imaginations can take us further than any camera shot or special effects could. Spielberg uses our most basic fears of the unknown to increase the tension and suspense in the film. He is a master of manipulation. He also uses the music throughout the film to show the shark presence so when the shark appears without the music it is a great shock to the audience. Although we do not see the shark very much we will often see or hear about the damage it has caused and in one particular scene the audience's immediate reaction is to jump out of their seats as the head of a fisherman appears in the hole that was made by the shark. ...read more.

The last attack is when the shark gets onto the edge of the boat and eats Quint. This a surprising turn of events Quint and Hooper were the most experienced and our initial thought was that it was going to be Brody who will die. In the climax of the film, where almost all hope is lost the director leaves the audience on the edge of their seats wondering whether Brody will or will not defeat the shark. This is where the canisters come in significantly and with his last shot and determination Brody shoots the canister and the shark explodes. The audience is left with a sense of triumph My favourite and what I feel the scariest part of the film was when Hooper was under the water exploring the ship and the fisherman's head fell into the hole. I think this is the best part because you are not expecting it and also because you can see how much destruction the shark has caused. I think it is well shot and much unexpected. Steven Spielberg was an unknown 27 year old at the start of this film, but managed to make 'Jaws' and adventure/action/suspense film which had previously unseen special effects. It appealed to everyone, regardless of age or gender, and the director's techniques broke new ground, now widely used in suspense movies and winning him a much - deserved Oscar. ...read more.