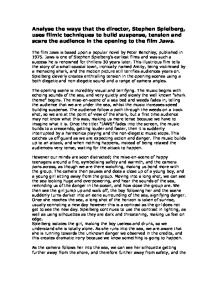 Analyse the ways that the director, Stephen Spielberg, uses filmic techniques to build suspense, tension and scare the audience in Jaws

Analyse the ways that the director, Stephen Spielberg, uses filmic techniques to build suspense, tension and scare the audience in the opening to the film Jaws. The film Jaws is based upon a popular novel by Peter Benchley, published in 1975. Jaws is one of Stephen Spielberg's earliest films and was such a success he is renowned for thrillers 30 years later. This illustrious film tells the story of a small coastal town, ironically named Amity, being victimised by a menacing shark, and the motion picture still terrifies audiences years on. Spielberg cleverly creates enthralling tension in the opening scenes using a both diegetic and non-diegetic sound and a range of camera angles. The opening scene is incredibly visual and terrifying. The music begins with echoing sounds of the sea, and very quietly and slowly the well known "shark theme" begins. The mise-en-scene of a sea bed and weeds fades in, telling the audience that we are under the sea, whilst the music increases speed building suspense. The audience follow a path through the weeds on a track shot, so we are at the point of view of the shark, but a first time audience may not know what this was, making us more tense because we have to imagine what it is. Once the title: "JAWS" fades into the screen, the music builds to a crescendo, getting louder and faster, then it is suddenly interrupted by a harmonica playing and the non-diegetic music stops. ...read more.

The camera then switches to a close up of her smiling face, showing how happy and beautiful she is, making us like her character and anticipate her fate even more. Again the camera switches back to the boy, making the audience impatient as we don't care about him because we know he is safe, while we want to find out if the girl is out of harm's way, as well as showing that the boy can be of no help, and reinforcing that Chrissie is isolated. The scene then switches to the shark looking up at the girl kicking, and the diegetic music starts again, fairly calm and serene but also quite spooky. As we get closer to the girl we know that the danger is coming closer to her and anticipate the attack, and we still don't see the shark so we don't know what it is, making us imagine the worst. The sun above the girl shines down making her into a silhouette, dehumanising her, making her seem like prey, and that the killer has no compassion. Throughout the scene, the camera switches between the top and bottom of the water, continually building then breaking tension, as we know under the water is the danger, but above the water she is blissfully unaware, creating dramatic irony, making us want to shout to Chrissie to get out of the water. ...read more.

This builds tension as the shark is still in the water but remains but nobody is aware of it, so it could strike again and at any time. The silence also signifies death, and the only sound of bell of the buoy sounds like a toll bell, rung at funerals. The silence also gives us time to contemplate what has happened, and the scene of the attack gently fades into a scene of a lucious blue sea and a beautiful day, with the sound of Brody's radio, showing that it is just a normal day and no-one is aware of what has taken place. As Spielberg did not have the benefit of using the special effects like we do today, tension in Jaws is mainly built up through the soundtrack and the audiences imagination. The technique of not showing the shark until the last quarter of the film, makes us imagine the killer to be much more terrifying than if we had seen it as a shark from the start. The theme music is associated with an attack and the character of the atacker, this technique is known as a leitmoif and puts the audience on edge whenever they hear it, in fact the theme music was so successful it is still famous now. As the film is loosely based on true facts, shark attacks are occurances, even though they are not common, Spielberg uses fantastic techniques making Jaws really live up to its tagline : "You'll be afraid to go back in the water" Jade Hicks ...read more.