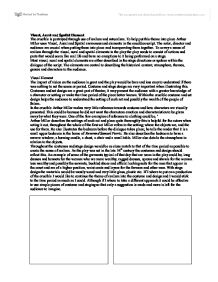 Analysis of Visual, Aural and Spatial Elements in 'The Crucible'

Visual, Aural and Spatial Element The crucible is portrayed through use of realism and naturalism. To help put this theme into place Arthur Miller uses Visual, Aural and Spatial awareness and elements in the crucibles script. The actor, director and audience are crucial when putting these into place and incorporating them together. To covey a sense of realism through the visual, aural and spatial elements in the play the play needs to consist of actions and parts that would seem like real life and have no exceptions to it being performed on a stage. Most visual, aural and spatial elements are either described in the stage directions or spoken within the dialogue of the script. The elements are central to describing the historical context, atmosphere, themes, genres and characters to the audience. Visual Element The impact of vision on the audience is great and the play would be bare and less easy to understand if there was nothing to set the scene or period. Costume and stage design are very important when illustrating this. Costumes and set design are a great part of theatre; it may present the audience with a greater knowledge of a character or setting or make the time period of the piece better known. Within the crucible costume and set design helps the audience to understand the setting of each act and possibly the wealth of the people of Salem. ...read more.

Aural Element Arthur Miller uses a lot of sound and verbal expression in his work along with dialogue read by an actor. Miller writes that there is the sound of singing from off stage. Although there are no sound effects the objects being moved and handled by John Proctor when he enters the room, make noise that gives the impression of a kitchen. John also makes an effort to be quiet so that it may become apparent that he is doing something that he does not want to get found doing. Towards the end of the second act the dialogue is much more frantic and there are many more people involved. It makes a nice contrast from the beginning when everything was much more contained and civil. In the stage version of the Crucible the voice heard at the start is of a woman which is later found out to be John Proctors wife, Elizabeth Proctor. It is the assumed that she may be singing to children as the song is a lullaby. At the end of the second act there is a lot more movement which results in more objects being dislodged and making a noise. Sound effects are used throughout the play; the most significant could be that of the drum beat at the end which signifies the play coming to an end and a solemn finish. ...read more.

My main Concern when deciding on spatial awareness was to incorporate tragedy. We could come up with some ideas that portrayed this, for example the space between Elizabeth and John in the house scene; there was always literal space between them in this scene which also could be signified as the distance within their marriage. We use these ideas and incorporate them into the acting. There are also a lot of other methods used in the crucible to deliver lines and to make characters in the play come across in specific ways. The most significant clue to the characters in the Crucible is the short texts that appear in different parts of the scripts concerning the different characters. Miller takes a short amount of time to explain about the background and characteristics. For example one line from an extract about Mr Hale is: 'nearing forty, a tight skinned, eager-eyed, intellectual.' Characteristics are also portrayed through the stage direction and dialogue. In other performances of the Crucible and the scenes we devised we researched into Stanislavskys methods of realism acting techniques. One of the best ways of exploring this is to use improvisation so that the dialogue is completely real and not planned. Our interpretation of our scene varied and contrasted with some of the others in the way that it was performed, aurally, spatially and visually because of use of acting technique and the way in which we set the scene and identified the characters. ...read more.