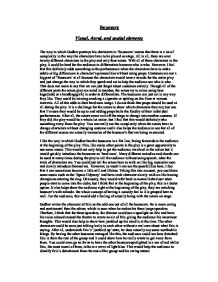 Bouncers Visual, Aural, and spatial elements The way in which Godber portrays his characters in 'Bouncers' means that there is a lot of complexity in the way the characters have to be placed on stage. All in all, there are over twenty different characters in the play and only four actors. With all of these characters in the play, it could be hard for the audience to differentiate between who is who. However, I feel that this definitely adds something to the performance when the characters have to make subtle or big differences in character's personalities without using props. Costumes are not a big part of 'Bouncers' at all because the characters would wear a tuxedo for the entire play and just change the way in which they speak and act to help the audience see who is who. That does not mean to say that we can just forget about costumes entirely. Though all of the different parts the actors play are acted in tuxedos, the actors try to mime using beer kegs(lads) or a handbag(girls) in order to differentiate. The bouncers can just act in any way they like. They could be miming smoking a cigarette or spitting on the floor at various intervals. All of this adds to their hard man image. ...read more.

After all, underneath Eric's 'jumbled up' state, he does actually say some worthwhile things. By having the other bouncers arranged like this, the audience could see how detached Eric is from the rest of the group and it could show how he really wants to get away from them. You could even go so far as to have the other bouncers spotlighted in a sea of red whilst Eric, the most moral of them, talks in a wave of light blue. This would help the audience to identify Eric's detachment from the rest of the group and his caring nature. Godber's inspiration for the play comes from a club called Kiko's in Pontefract. This is quite a corny place with palm trees on the dance floor and other such things. You can really see the likeness of this corniness with that of the play in general. We see this being especially evident in the disco scene at the beginning of the play when the DJ says: "Yeah! Wow! Things are really happening down here tonight... yes a pair of knickers and a bra, there'll be a bottle of Asti Spumante and a fortnights free entry, get it? ...read more.

In a lot of plays, music plays a fundamental part, but this is even more the case in 'Bouncers' than in any other. For example, when Judd and Eric are arguing about him being 'soft' a slow rise in some dramatic music could be heard in the background. The director could even choose some ironic music in the form of something like a sound of an out of tune violin, building up and up in pitch (like the squawking violins in the film 'Psycho'). This would emphasize once more the way in which Godber writes seriousness and comedy side by side. Music could also play a part in the interlude. The corny DJ could come out and try and get some of the audience playing more of a part in the action as if he is talking to them as his audience in the club. This would mean that the audience get more involved, and in turn they are encouraged to engage with the actors and feel more comfortable with them. If this was incorporated into the play, the audience wouldn't feel as though there is a break up of the night and it would run smoothly through (after all, it is not a very long play anyway). The director could even consider not having an interval at all and just a longer blackout. ...read more.