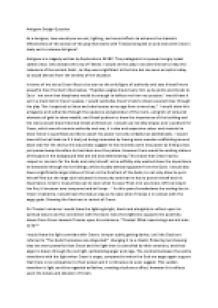 As a designer, how would you use set, lighting, and sound effects to enhance the dramatic effectiveness of the section of the play that starts with Tiresias being led on and ends with Creons hasty exit to release Antigone?

﻿Antigone Design Question As a designer, how would you use set, lighting, and sound effects to enhance the dramatic effectiveness of the section of the play that starts with Tiresias being led on and ends with Creon?s hasty exit to release Antigone? Antigone is a tragedy written by Sophocles in 441BC. The protagonist is a power hungry tyrant called Creon, who dictates the city of Thebes. I would set the play in ancient Greece to keep the relevance of the ancient Gods , as they were significant at the time but are seen as myths today, so would detract from the severity of the situation. In terms of my set as Creon likes to be seen as the only figure of authority and sees himself more powerful than the God?s themselves. ?If golden eagles should carry him up by joints and shreds to Zeus?not even that blasphemy would be enough to deflect me from my purpose.? would have it set in a main hall in Creon?s palace. ...read more.

I would also have a significantly larger statue of Creon in the forefront of the Gods, to not only show he puts himself first but the large size indicates his insecurity and that he has to prove himself and his importance. Creon?s insecurities can be seen when he says ?Even iron you know, left too long in the fire, it becomes over tempered and will snap?? As this quote foreshadows the ending due to Creon?s hamartia, I would have the statue snap as he said, when Tiresias is in contact with the angry gods. Showing the Gods are in control of Creon. On Tiresias? entrance I would have the lighting bright, harsh and almightly to reflect upon his spiritual nature and his connection with the Gods. Also the brightness supports the positivity shown from Creon towards Tiresias upon his enterance. ?Tiresias! What news brings and old man so far?? I would have the light correlate with Creons temper subtly getting darker, until the Gods are referred to ?The Gods themselves are disgusted!? changing it to a chaotic flickering red showing they are more ...read more.

When Tiresias says ?For god sake listen to me now?? I would have the drone suddenly stop to build tension, as sudden silence, is eerie and unforeseen, just as Creon is oblivious to his future, however it was not unforeseen to Tiresias. On this line I feel Tiresias becomes more severe, so the severe halt of sound with complement this. From the line ?I can hear? from Tiresias I would have subtle tremolo picking building in volume and tempo up until ?The God themselves are disgusted.? And the lights turn red. The rising volume and tempo mirror the rising tension building between the two characters and the anger of the Gods, being introduced. At the start of the line as the lights go red, there would be a loud sharp bang. To signal that Tiresias is just channelling the Gods, however it is the Gods communicating their message, through sound and light too. Then from then on their will be a diminuendo of sound to show that Creon is too spiralling out of control, and it prepares the audience for the downfall of Creon, through the downfall of volume and tempo. ...read more.