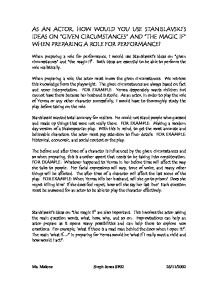 As an actor, how would you use Stanislavski's ideas on &quot;given circumstances&quot; and &quot;the magic if&quot; when prepairing a role for performance.

FOR EXAMPLE: Making a modern day version of a Shakespearian play. With this in mind, to get the most accurate and believable characters, the actor must pay attention to finer details. FOR EXAMPLE: Historical, economic, and social context or the play. The before and after time of a character is influenced by the given circumstances and so when preparing, this is another aspect that needs to be taking into consideration. FOR EXAMPLE: Whatever happened to Yerma in her before time will affect the way she talks to people. ...read more.

Each question must be answered for an actor to be able to play the character effectively. Stanislavski's ideas on "the magic if" are also important. This involves the actor asking the main question words, what, how, why, and so on. Improvisations can help an actor prepare as it opens many possibilities and can help them to explore new emotions. For example, 'what if there is a mad man behind the door when I open it?'. The main 'what if...?' in preparing for Yerma would be 'what if I really want a child and how would I act?'. Ms. Malone Steph Jones SF02 26/11/2002 ...read more.