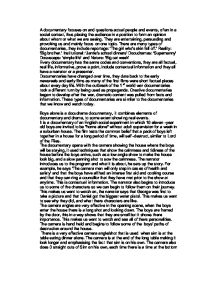 A documentary focuses on and questions actual people and events, often in a social context, thus placing the audience in a position to form an opinion about whom or what we are seeing. They are entertaining, persuading and provoking us and mainly focus on one topic. There are many types of documentaries, they include reportage: 'The girl who's skin fell off.' Reality: 'Big brother.' Institutional: 'Jamie's school dinners' Docudramas: 'Supernanny' Docusoaps: 'simple life' and Nature: 'Big cat week' Every documentary has the same codes and conventions, they are all factual, real life, informative, prove a point, include contextual information and they all have a narrator or a presenter. Documentaries have changed over time, they date back to the early newsreels and early films as many of the first films were short factual pieces about every day life. With the outbreak of the 1st world war documentaries took a different turn by being used as propaganda. Creative documentaries began to develop after the war, dramatic content was pulled from facts and information. These types of documentaries are similar to the documentaries that we know and watch today. Boys alone is a docudrama documentary, it combines elements of documentary and drama, to some extent showing real events. It is a documentary of an English social experiment in which 10 eleven-year old boys are invited to be "home alone" without adult supervision for a week in a suburban house. ...read more.

Damilola has a narrator, but boys alone has narration, where you do not see the person narration, you do not have a human figure to relate to. Boys alone opens with the narrator telling the audience about the program and informing them, where as Damilola has a much stronger opening, it goes straight into talking to his parent and friends, and the narrator introduces us to Damilola gradually after that. The Damilola opening does not need to use framing of handheld cameras to create interest. The audience have chosen to watch the documentary to find out more so they are already interested. This is a contrast to the Boys alone documentary, the title is not as self explanatory as Damilola Taylor so it is in the opening of the documentary a lot of information about what they are about to view is needed, but not too much to give it all away and make the viewer not want to watch on. In a documentary it is one thing to attract an audience's attention, but to sustain it is a lot harder. A mixture of editing, music, narration, story line and contextual information is needed to keep an audience watching. In Boys alone the audience attention was sustained by using the reactions of the characters, the flow of the story line, the narration and the good camera angles. ...read more.

The editing is similar, boys alone makes us feel like all the mess is Michael, by having lots of straight cuts of him and in Damilola it gives us lots of facts and shows us all the bad things about the untouchables and then shows us how damilola died. In both situations we feel like the person we see is the culprit. The two documentaries are both very effective, it lots of different ways. Camera angles and editing enphasize things that we already no and that the narrator is telling us. The music brings the pictures to life and we feel the mood that is being portrayed at the time. I feel that the Damilola Taylor essay is more effective because of the sections that the documentary is split into. They could have been put in any order but the film maker has chosen one that sustains the audience the most. They make the audience see things and then see the result and this makes them angry and upset, this draws them into the documentary because they want to see what's going the happen and be the result. Boys alone is a docudrama so thins have to run the way the story is running, but the film maker tries to get round this by cutting out bits and making others look like they happened in quick succession, for example making Michael look like he has done all the mess and made a mess for a long time and all day, by using straight cuts. ...read more.