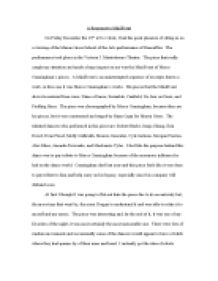 Dance Response. The piece that really caught my attention and made a huge impact on me was the MiniEvent of Merce Cunninghams pieces.

﻿A Response to MiniEvent On Friday December the 10th at 8 o?clock, I had the great pleasure of sitting in on a viewing of the Mason Gross School of the Arts performance of DancePlus. The performance took place in the Victoria J. Mastrobuono Theater. The piece that really caught my attention and made a huge impact on me was the MiniEvent of Merce Cunningham?s pieces. A MiniEvent is an uninterrupted sequence of excerpts drawn a work, in this case it was Merce Cunningham?s works. His pieces that the MiniEvent drew its material from were: Dime a Dance, Scramble, Canfield, Un Jour ou Deax, and Fielding Sixes. The piece was choreographed by Merce Cunningham, because they are his pieces, but it was constructed and staged by Banu Ogan for Mason Gross. The talented dancers who performed in this piece are: Robert Burke, Sonja Chung, Erin Dowd, Evan Flood, Molly Galbraith, Monica Gonzalez, Cyle Jackson, Morgan Preston, Alex Rhea, Amanda Treweeke, and Mackenzie Tyler. ...read more.

I instantly got the idea of robots watching the piece because of how mechanical the movements were and because the dancers all moved in the same way. I also associated it to robots because they made little to no facial expressions. None of the motions appeared to be organic or human to me. The elements of the piece that stood out most to me were the costumes and the music. The music started off as extremely chaotic. It seemed like it made an attempt at moving towards tonal music to give a more peaceful ambience, but before it could get there it becomes chaotic again. The costumes were all beige skin-tight unitards which, I feel, was used to make everyone look the same and make it more difficult for the audience to separate the people in their head. The music felt futuristic and it clashed with what I would visualize as beautiful (which I think dance is supposed to be) ...read more.

There was rarely anyone doing something alone. Also, the dancers always moved in a very straight way; even when moving in circles there seemed to be an absolute, linear path. The costumes convey a sense of everyone is equal. The sound could have possibly detracted from the choreography if it distracts the viewer from the piece because of how estranged it is, but it can also do the opposite and enhance the performance for the viewer because the piece itself is intrinsically strange. I feel like the point of the piece was to make you uncomfortable and view the world with different eyes. Instead of organic life-like movements the piece was very mechanical and did not give any individual a personality. They all worked together as a unit and this made them successful, even though things around them were hectic and out of order. Overall I enjoyed the piece and it opened my eyes to a form of dance that I once thought as inferior to the classics. The MiniEvent and DancePlus in general has encouraged me to attend more dances in the future. ...read more.