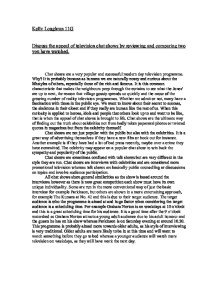 Discuss the appeal of television chat shows by reviewing and comparing two you have watched.

Kelly Loughran 11G Discuss the appeal of television chat shows by reviewing and comparing two you have watched. Chat shows are a very popular and successful modern day television programme. Why? It is probably because as humans we are naturally nosey and curious about the lifestyles of others, especially those of the rich and famous. It is this common characteristic that makes the neighbours peep through the curtains to see what the Jones' are up to next, the reason that village gossip spreads so quickly and the cause of the growing number of reality television programmes. Whether we admit or not, many have a fascination with those in the public eye. We want to know about their secret to success, the skeletons in their closet and if they really are human like the rest of us. When this curiosity is applied to heroes, idols and people that others look up to and want to be like, that is when the appeal of chat shows is brought to life. Chat shows are the ultimate way of finding out the truth about celebrities not from badly taken paparazzi photos or twisted quotes in magazines but from the celebrity themself. ...read more.

A good example of this is the camera movement. In this show the camera remains still only moving to different positions depending on who is talking. This again is to appeal to the audience as they are likely to be older and will not want to watch a fast moving programme that is constantly changing camera angles. On the other hand all chat shows share the framing of angles in common as when a guest is talking about a more personal subject the camera does a big close up to make it more intimate and serious but in general conversation it is more likely to be a medium shot. The show is quite formal but is more like an insight on a brief chat that two old friends are having. The main success of this programme is mainly down to Parkinson as his role and reputation, which makes the guest warm to him and are more willing to open up about issues in their life. Parkinson is seen as "The Daddy" of chat shows as his is the longest running and he can somehow manage to have something that will help him and his guest click into a humorous conversation. ...read more.

"The Mrs Merton Show" is another example of a modern chat show that has parodied the typical conventions of chat shows as Mrs Merton purposely has "B list" celebrities. She does this so she can make fun of them therefore entertaining the audience. The audience in this chat show is again showed and made important as the show opens with them doing the conga around the stage. This shows unique selling point is the fact that Mrs Merton who is an old lady is actually a young woman dressed up as on old age pensioner. She cracks jokes to the audience about false hips and dentures and northern accent and dialect add to the humour. I have established that chat shows are very popular and that the appeal from them is becoming more than just the guests. This is because chat shows have turned from just the basic interview to a programme with characters (The Ali G Show) audience participation, for example anecdotes or games (Graham Norton) and performances and humour (The Kumars at Number 42). Entertainment is getting harder to fulfil as each show has to bring something new to appeal and compete with other chat shows to gain and maintain its audience however the base for any chat show will always remain the celebrities that appear on the show. ...read more.