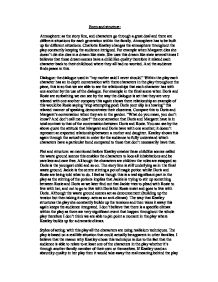 form and structure my mother said

Atmosphere: as the story line, and characters go through a great deal and there are different situations for each generation within the family. Atmosphere has to be built up for different situations. Charlotte Keatley changes the atmosphere throughout the play constantly keeping the audience intrigued. For example when Margaret dies she doesn’t die she dies in a dream like state. She uses this dream like state several times I believes that these dream scenes have a child like quality therefore it related each character back to their childhood where they all had no worried. And the audience finds peace in this.

Dialogue: the dialogue used in “my mother said I never should.” Within the play each character has an in-depth conversation with there characters in the play throughout the piece, this is so that we are able to see the relationships that each character has with one another by the use of the dialogue. For example in the final scene when Doris and Rosie are sunbathing we can see by the way the dialogue is set that they are very relaxed with one another company this again shows there relationship an example of this would be Rosie saying “stop attempting posh Doris your slip is showing” this relaxed manner of speaking demonstrates their closeness. Compare this to Doris and Margaret’s conversation when they are in the garden. “What do you mean, you don’t know? And don’t call me dear!” the conversation that Doris and Margaret have is in total contrast to that of the conversation between Doris and Rosie. You can see by the above quote the attitude that Margaret and Doris have with one another; it doesn’t represent an expected relationship between a mother and daughter. Keatley shows this again through the actual text in order for the audience to fully understand which characters have a particular bond compared to those that don’t necessarily have that.

Plot and structure: as mentioned before Keatley creates these childlike scenes called the waste ground scenes this enables the characters to loos all inhabitations and be care less and care free. Although the characters are children the roles are swapped so Doris is the youngest child and so on. The story line is still underlying as in the final waste ground. Jackie is the centre stirring a pot of magic potion whilst Doris and Rosie are being told what to do. I feel as though this is a real significant part in the play as the stirring of the potions implies that Jackie is trying to stir up something between Rosie and Doris as we later find out that Jackie tries to plead with Rosie to live with her, and not to go to live with Doris but Rosie insist and goes to live with Doris. Although the waste ground scenes act as denouncement (building up the tension but then taking it away- acts as an anti-climax)  The way that Keatley structures the play she constantly builds up the tensions and then takes it away this again keeps the audience integrated. I don’t believe that there is a specific climax within the play as there are very significant event that happen throughout the whole play therefore I don’t think we are able to pin point a moment in the play where Keatley builds up for a dramatic climax.

Styles of acting: with this play all the characters are using realisium techniques. The play is based on a real life situation that could actually be apparent in other families. I believe that the reason why Keatley chose this technique is due to the fact that the audience is able to relate to at least one of the characters in the play whether it’s through another family member of their own or themselves. If Keatley used an absurdity quality in her play then it would take away the real meaning behind the play which is that its real life and they breakdowns in communication through one way or another does happen among families. And affect them through generations. The characters are well characterised for example Doris even though she is the oldest character she is also the most sane we know this by the way she is portrayed with her conversations with Rosie, and also the scene where they are cleaning out all of jacks belongings after he had died. We see how she known the ins and outs of the family complications even though she is the oldest and pre-conceived ideas of elderly people is that they don’t know what’s going on; Doris contradicts this stereotype through the style of acting that Keatley what’s to portray.

Setting: the set is very minimal but also realist so if there is meant to be a seat in a scene then the characters would not mime the chair but have an actual chair this co-inside with Keatley image of realism within the performance. The props are very minimal as Keatley says that nothing should be on set if it has no purpose or reason. She believes that the symbolism of the objects doesn’t come from what they are but how they are used. For example the grand piano is scene throughout all of the scenes it acts as a safe base for all generations, it also physically acts as a safe base for when Doris and Margaret where going through he effects of the world war they used to hind underneath it to protects themselves. Another example of this would be when Jackie keeps one of Rosie’s red socks before she gives her away to Margaret. Jackie then takes this with her in her packet everywhere and she gets it out at the end of act one, bringing the emotional history on stage. An object that I feel is very significant also is the game of solitaire, which at the end of the play Doris is teaching Rosie how to play. Doris used to play this game with her mother and there is a unity found with these to characters when they are brought together by this game of solitaire which then demonstrates their relationship on stage.