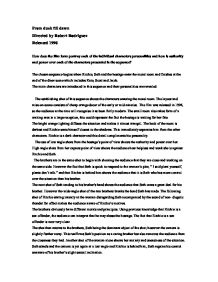 From dusk till dawn

From dusk till dawn Directed by Robert Rodriguez Released 1996 How does the film form portray each of the individual characters personalities and how is authority and power over each of the characters presented in the sequence? The chosen sequence begins when Ritchie, Seth and the hostage enter the motel room and finishes at the end of the diner scene which includes Kate, Scott and Jacob. The main characters are introduced in this sequence and their personalities are revealed. The establishing shot of this sequence shows the characters entering the motel room. The layout and mise-en-scene consists of cheap orange decor of the early or mid-nineties. The film was released in 1996, so the audience at the time will recognise it as been fairly modern. The small room also takes form of a waiting area in a large reception, this could represent the fact the hostage is waiting for her fate. The bright orange lighting diffuses the situation and makes it almost tranquil. The back of the room is darkest and Ritchie seats himself closest to the shadows. This immediately separates him from the other characters. Ritchie is a dark character and this detail compliments his personality. The use of low angle shots from the hostage's point of view shows the authority and power over her. ...read more.

When Seth re-enters the motel room the camera follows the suit case containing the money. Seth carelessly places the case on a chair clearly illustrating his trust in his brother to be near it. Seth's control and authority is clear in this shot as the camera is at a low angle from when he re-entered the room, "What time does it get dark around here?" The high angle shot again gives him control. This small phrase could also symbolise the dark motives Ritchie is considering and the darkness in the room. The next few shots leave the hostage out as the brothers argue; Seth is, again, in more control. His knowledge and manner, "This conversation's over" clearly shows that Ritchie has no say or power in his brother's presence. The shots become wider as the argument begins getting closer to Seth's face as he becomes more agitated and serious but stays calm. One last close up of Seth's face as his eye twitches shows that he is angry underneath. The next shot contains all three characters, Seth is in the foreground emphasising his control, the hostage barely in the picture illustrating her insignificance to the brothers and the film and Ritchie, again, behind his brother. Again, Ritchie is staring intently at the hostage as Seth instructs her. ...read more.

learns about the past of the family, close up cut shots of Kate and Jacob show that this is an intimate moment between the father and daughter. The fact the shots at Jacob are over the shoulder shots from Kate shows that this is a personal moment between the two. When the conversation becomes tense medium shots reflects the break in tranquillity. Jacob clearly becomes disgusted in the subject of his past and grimaces tightly. The effect on Kate is that of realisation and shock. The audience become involved with the family because they now know of their past and this makes it easier to sympathise with the family. In conclusion, it is clear that high angle shots and low angle shots give the criminals, Ritchie and Seth, a great deal of power in the varied situations however it is very clear that Seth seems even more in control than his brother. The audience can be clear on this because high angle shots give Seth power over his brother as well as the hostage alone. Close ups make the audience intimate with the characters. As seen in the motel scene but more clearly in the restaurant. When the characters are talking about a more intimate and sensitive parts of their lives the audience get closer and intimate too. This is how personalities and authority is demonstrated in the sequence. ...read more.