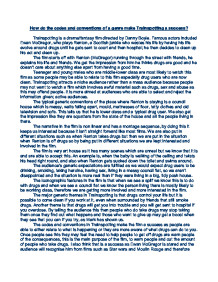 How do the codes and conventions of a genre make Trainspotting a success?

How do the codes and conventions of a genre make Trainspotting a success? Trainspotting is a drama/fantasy film directed by Danny Boyle. Famous actors included Ewan McGregor, who plays Renton, a Scottish junkie who wastes his life by having his life evolve around drugs until he gets sent to court and then hospital; he then decides to clean up his act and clean up. The film starts off with Renton (McGregor) running through the street with friends, he explains his life and friends. We get the impression from him he thinks drugs are good and he doesn't care about anything else apart from having a good time. Teenager and young males who are middle-lower class are most likely to watch this film as some people may be able to relate to this film especially drug users who are now clean. Trainspotting attracts a niche audience rather than a mass audience because people may not want to watch a film which involves awful material such as drugs, sex and abuse as this may offend people. ...read more.

An example is, when the baby is walking of the ceiling and twists his head right round, and also when Renton gets sucked down the toilet and swims around. The audience's generic expectations are fulfilled as we would expect drug users to be drinking, smoking, taking heroine, having sex, living in a messy council flat, so we aren't disappointed and the situation is more real than if they were living in a big, tidy posh house. The iconographic features in the film is that when we see a splif we know this is to do with drugs and when we see a council flat we know the person living there is mostly likely to be working class, therefore we are getting more involved and more interested in the film. The major generic themes in Trainspotting is that drugs control your life but it is possible to come clean if you work at it, even when surrounded by friends that still smoke drugs. ...read more.

directed. Shallow Hale is also a drama film and if the audience have watched Shallow Hale they have expectations that Ewan McGregor needs to live up to. I think the whole art house effect adds to the success as it is made to look unreal but not like a cartoon. It doesn't put us off the film as it goes with the fact that drugs cause weird effects such as hallucination, so in a way it is involving us into the film and letting us know how it feels to be on drugs. The film has also been a success because of the director "Danny Boyle" who has directed films such as Shallow Hale and has become the English Quentin Tarentino because of his camera effects. He also makes use of soundtrack which is important in films as it adds tension and can carry the story on to make it more interesting, "It is very important with this kind of film that the soundtrack was very appealing so that it drives the film and people connect with it at different points." Danny Boyle. ...read more.