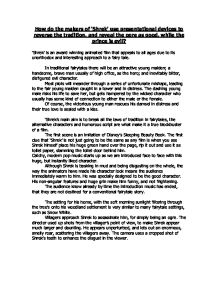 How do the makers of 'Shrek' use presentational devices to reverse the tradition, and reveal the ogre as good, while the prince is evil?

How do the makers of 'Shrek' use presentational devices to reverse the tradition, and reveal the ogre as good, while the prince is evil? 'Shrek' is an award winning animated film that appeals to all ages due to its unorthodox and interesting approach to a fairy tale. In traditional fairytales there will be an attractive young maiden; a handsome, brave man usually of high office, as the hero; and inevitably bitter, disfigured evil character. Most plots will meander through a series of unfortunate mishaps, leading to the fair young maiden caught in a tower and in distress. The dashing young male risks his life to save her, but gets hampered by the wicked character who usually has some kind of connection to either the male or the female. Of course, the victorious young man rescues his damsel in distress and their true love is sealed with a kiss. 'Shrek's main aim is to break all the laws of tradition in fairytales, the alternative characters and humorous script are what make it a true blockbuster of a film. The first scene is an imitation of Disney's Sleeping Beauty Book. ...read more.

Lord Farguaad's first appearance in the film is a disillusion. Another up shot is used to give the impression that the Lord is huge and intimidating as he strides through his castle. It is only when the camera shot is moved into perspective that the viewers see Lord Farquaad's ridiculously small body. It is very unusual for a royal character to be non other than perfectly formed and well groomed. 'Shrek' has introduced the evil character, and it is not what the audience expected. The next scene shows Lord Farquaad torturing a gingerbread man by dunking him in milk. This is not meant to be scary, yet is meant to make the audience realise that the Prince is not the good character in this fairy tale, but a cruel and gutless little man. He orders Shrek to rescue the Princess for him instead of being courageous and doing it himself. Familiar television programmes and film ideas are used throughout the film to bring to life that animation has reached new heights. Popular television programmes such as Blind Date are incorporated into the story and add an edge of reality to the animation. As well as being humorous for all age groups. ...read more.

We soon find out that the secret Fiona is hiding is that she too is an ogre from sunset to sunrise every day. Meanwhile, Shrek and Donkey sit beneath the stars, and use a line from the well-known, Lion king, in conversation. The grand wedding cathedral is made to look vast as the camera shot does a down shot from the ceiling making the people look small in comparison. Fiona is so adamant on marrying her Prince that it would seem Lord Farquaad's appearance does not matter to her, as long as the marriage took place before sunset. That is not the case, and her curse is revealed in front of the whole cathedral. Lord Farquaad rejects her, and it is Shrek's turn to meet his one true love. In conclusion, the film brought to light that the rules of tradition are not always to be followed. Ogre's will no longer be the inevitable 'bad-guy' and people will think twice about Princes with bad attitudes. This parody of fairytales will always be a unique and memorable production due to its clever humour and array of deceptive camera shots and cleverly presented ideas. It is suitable for all ages, and this is what made it so phenomenally successful. Georgia Anderson 10V ...read more.