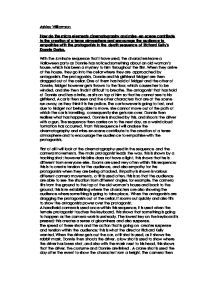 How do the micro elements cinematography and mise-en-scene contribute to the creation of a tense atmosphere and encourage the audience to empathise with the protagonists in the death sequence of Richard Kelly's Donnie Darko.

Ashley Williamson How do the micro elements cinematography and mise-en-scene contribute to the creation of a tense atmosphere and encourage the audience to empathise with the protagonists in the death sequence of Richard Kelly's Donnie Darko. With the 6 minute sequence that I have used, the characters leave a Halloween party as Donnie has noticed something about an old woman's house, which has been a mystery to him throughout the film. When they arrive at the house, they go into the cellar where they are approached by antagonists. The protagonists, Donnie and his girlfriend Bridget are then dragged out of the cellar. One of them has hold of Bridget and the other of Donnie, Bridget however gets thrown to the floor, which causes her to be winded, and she then finds it difficult to breathe. The antagonist that has hold of Donnie and has a knife, as sits on top of him so that he cannot see to his girlfriend. A car is then seen and the other characters that are at the scene run away, as they think it is the police. ...read more.

For example, before the two main protagonists enter the cellar, they are in the main focus, where as the two people who arrived with them are blurred, this shows the audience that the characters not blurred are going to be involved in the next occurrence. Also when the character in the rabbit suit gets out of the car, the background is blurred, this also happens when the camera is on Donnie. The camera focuses in the on mask, which shows the direct link between him and Donnie. When the character in the rabbit suit is killed, the camera focuses on his shot wound, with the rabbit mask next to him, first blurring the mask and then the shot wound. Framing however is the same through out the sequence, the male protagonist is always placed left of the screen, however when the roles change in power, the antagonist on top the protagonist is placed left of the screen, showing he is more important and has more power in this part of the sequence, because the protagonist is unable to move as he has a knife to his neck. ...read more.

When frank arrives, he gets out of the car, with a shocked and upset facial expression, this expression shows that he didn't mean to run over the female protagonist. When the gun is pulled out the male protagonist's jacket, the facial expression on his face is deluded, where as franks face is very much confused and shocked. When everything is over and silent, the posture of the male protagonist is relaxed, its as if he is happy its over. He however also looks upset as he drops his head to look at the floor, and at the same time dropping the gun. Overall in the sequence, cinematography and mise-en-scene have a large effect on the tension and empathy within the film. In the beginning of the sequence panning shots are used to create a sense of urgency, this is also show in the death part of the sequence, which creates tension. The camera movements and shots are used to exaggerate the most important parts of the sequence to the audience, this helps create the empathy within the film. This helps keep the audience entertained, yet not make the action to predictable. Throughout the sequence, the mise-en-scene sets the mood of the sequence and also the genre of the film, although this is helped through the cinematography techniques that are also used. ...read more.