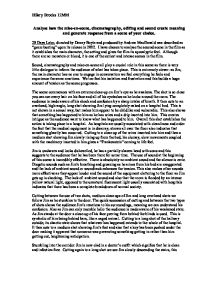 28 Days later - Analyse how the mise-en-scene, cinematography, editing and sound create meaning and generate response from a scene of your choice.

Analyse how the mise-en-scene, cinematography, editing and sound create meaning and generate response from a scene of your choice. 28 Days Later, directed by Danny Boyle and produced by Andrew MacDonald was described as "genre busting" upon its release in 2002. I have chosen to analyse the second scene in the film as it establishes the main character, the setting and gives the film its apocalyptic feel. Although there are no monsters or blood, it is one of the eeriest and intense scenes in the film. Sound, cinematography and mise-en-scene all play a crucial role in this scene as there is very little dialogue to inform the audience of what has taken place. This is extremely clever: as Jim, the main character has no one to engage in conversation we feel everything he feels and experience the same emotions. We too feel his isolation and frustration and this builds a huge amount of tension as the scene progresses. The scene commences with an extreme close-up on Jim's eye as he awakens. The shot is so close you can see every hair on his face and all of his eyelashes as he looks around the room. The audience is made aware of his shock and confusion by a sharp intake of breath. ...read more.

Now cutting to a close-up of some hanging telephones, Jim enters the frame and frantically searches for a working phone. He is unsuccessful and this shows the audience all forms of communication have been cut. Next a close-up shows Jim's lower body with cans of pepsi in the forefront of the frame, the camera tilts up to reveal Jim thirstily devouring a drink. The guzzling noise is exaggerated again highlighting the lack of ambient sound and making Jim seem even more isolated and alone. Cutting to a high-angle long shot we see a vending machine that has spilt its wares and Jim gathers some of these the realisation he realises something terrible has happened sets in. A canted low angle shot shows Jim has left the building and then this cuts to an aerial shot making him seem minute and completely insignificant against the high-rise buildings showing again how vulnerable and alone he is. The colours and the natural light give it a gritty, realistic feel and the blue hue gives it freshness as well. As he wanders through London the sequence cuts between long shots of the setting and medium shots of the main character. Famous monuments such as Tower Bridge, the Houses of Parliament and London Eye set the location and allow audiences beyond Britain, particularly the American public to feel more comfortable with this British film. ...read more.

The music now increases in speed and volume as Jim moves on down the street. The Mise-en-scene here is extremely well executed, litter and newspapers are strewn everywhere and confusion is added to by using canted angles showing Jim picking up a newspaper then cutting to an extreme close-up of the headline "Evacuation, mass exodus of British People causes chaos" portraying what has happened to the audience. Jim throws down the paper in despair and moves towards a small monument covered in posters. The sun is shown directly behind the building and seems huge giving this shot an Armageddon feel. Using a hand-held camera it cuts between close-ups of Jim's face and close-ups on the missing people messages on the board, allowing the audience to see Jim's reactions but meaning they too can see what he is seeing. The sheer volume of messages provokes a powerful reaction in the audience as suddenly each missing person is given an identity and we are made aware that everyone must have lost someone special. Jim seems to smile with despair. The camera movements are wild, zooming in and out on the messages, spinning around Jim upwards showing his shock. The music finally reaches its peak and dies off as the camera now zooms in unsteadily on one specific picture of a little boy and fades to black, ending this dramatic, mysterious and tense scene. Word Count 1, 665 ?? ?? ?? ?? Hilary Brocks 12MM ...read more.