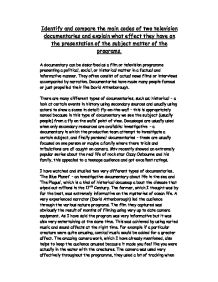 Identify and compare the main codes of two television documentaries and explain what effect they have on the presentation of the subject matter of the programs.

Identify and compare the main codes of two television documentaries and explain what effect they have on the presentation of the subject matter of the programs. A documentary can be described as a film or television programme presenting a political, social, or historical matter in a factual and informative manner. They often consist of actual news films or interviews accompanied by narration. Documentaries have made many people famous or just propelled their like David Attenborough. There are many different types of documentaries, such as; historical - a look at certain events in history using secondary sources and usually using actors to show a scene in detail; fly-on-the-wall - this is appropriately named because in this type of documentary we see the subject (usually people) from a fly on the walls' point of view. Docusoaps are usually used when only secondary resources are available; investigative - a documentary in which the production team attempt to investigate a certain subject, and finally personal documentaries - these are usually focused on one person or maybe a family where there trials and tribulations are all caught on camera. ...read more.

The amazing camera work, which I have already mentioned, also helps to keep the audience amused because it made you feel like you were actually in the water with the creatures. The camera was used very affectively throughout the programme, they used a lot of tracking when filming the moving animals and a lot of graphic matching, this must have gone unnoticed because almost all the filming was done under the sea. I also thought the shots above the water were effective because they showed the vastness of the sea. The sound also helped to make it seem like we were there because we could hear every single movement in the water of the fish that were being film. The latter named "The Plague" was also highly appealing, however entirely different methods were used to keep the audience watching with interest. Actors were employed to aid the making of the documentary to make it more realistic and entertaining and only secondary resources were available. ...read more.

Both the documentaries are presented in quite a formal way, but are presented in quite a formal way, but I think "The Plague" is slightly more so. I think "The Blue Planet" comes across as very impressive and spectacular - probably to make the audience "ooh" and "arr" and this is achieved. It was also very much eye candy for us. It consisted of many things we had never seen before, and if we had seen them they had never been film like that in any other programme. Although there have been hundreds of nature documentaries I think this one was very original. "The Plague" documentary was not quite so original, and rather than amazing us like "The Blue Planet" it had more of a tendency to disgust the audience. The two documentaries are presented in totally different ways "The Blue Planet" was glorified and consisted of excellent camera work, whereas "The Plague" gave us a easy to understand factual piece about a historical event. Using actors performing very graphic film. Although the camera work was good a lot of the same shots were filmed and this undoubtedly bored the audience. ...read more.