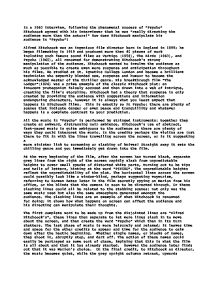 In a 1963 interview, following the phenomenal success of "Psycho" Hitchcock agreed with his interviewer that he was "really directing the audience more than the actors!" How does Hitchcock manipulate his audience in "Psycho"? Alfred Hitchcock was an ingenious film director born in England in 1899; he began filmmaking in 1919 and produced more then 40 pieces of work including such famous sound films as Vertigo (1958), The Birds (1963), and Psycho (1960), all renowned for demonstrating Hitchcock's strong manipulation of the audience. Hitchcock wanted to involve the audience as much as possible to create even more suspense and anticipation throughout his films. He studied at St. Ignatius College London and became a brilliant technician who expertly blended sex, suspense and humour to become the acknowledged master of the thriller genre. His breakthrough film "The Lodger"(1926) was a prime example of the classic Hitchcock plot: an innocent protagonist falsely accused and then drawn into a web of intrigue, creating the film's storyline. Hitchcock had a theory that suspense is only created by providing the audience with suggestions and information endangering characters, however it is always what you least expect that happens in Hitchcock films. This is exactly so in Psycho: there are plenty of scenes that indicate danger or even peace and tranquillity and whatever happens is a complete contrast to your prediction. All the music in "Psycho" is performed by stringed instruments: together they create an awkward, distressing noir ambience. Hitchcock's use of abstract, fast-paced music is quite ambiguous to the audience as there are plenty of ways they could interpret the music. In the credits perhaps the violins are just there to fit in with the lines travelling across the screen, or is it suggesting a more sinister link to screaming or slashing of knives? Straight away it sets the chilling genre and you immediately get drawn into the film. At the very beginning of the film, after the screen has turned black, separate grey lines from the right of the ...read more.

Hitchcock set up the scene to make out that the motel was her escape, her safe haven, but instead Marion encounters Norman Bates and is soon after savagely killed. After surprisingly surviving the drive to the motel the audience is now under the control of the film and Hitchcock expecting anything to follow. However the audience can't believe that much will happen to Marion so early in the film, as she was advertised on posters and the television as the leading lady in the film. The next scene begins with Marion on her own settling into her new motel room. She suspects nothing; however the audience knows different, as we are shown a small part beforehand where Norman the motel owner removes a painting and spies on Marion getting changed. Hitchcock has allowed the audience to see Norman's perverse eye and now feel a slight responsibility as they are shown his secret. Due to Hitchcock's manipulation - letting us see Norman secretly - the audience is already concerned for Marion's safety. She decides to take a shower, and walks into the bathroom. The lighting is adequate for a bathroom and there is no music to imply danger; the audience believes that Marion is naturally taking a shower; perhaps even linking the cleansing of her body to a cleansing of her mind and spirit, getting rid of all the bad thoughts, ready for a fresh start. She turns the shower head on and gets into the bath, sliding the curtain behind her. Marion seems to be relaxing under the spray of water, so the audience too becomes relaxed. However the camera moves from a close up of Marion's face to a mid shot and Marion's face is now in the bottom right hand corner of the screen; she is no longer central and all the attention is now drawn to the large blank piece of shower curtain. ...read more.

Camera shots are another of Hitchcock's useful devices. He uses "point of view " shots in the film to make the audience feel like they themselves are being stabbed, chased, or driving. This makes the audience nervous for their own safety. When Marion is driving the audience is practically put in her seat, they feel as if they themselves can drive the car and are stuck in the foul weather ahead. Point of view shots also generate sympathy for characters, for example in the shower scene we are put in Marion's shoes when she is getting stabbed, and we feel sorry for her having to go through so much pain. Another shot that is used to manipulate the audience's feelings is when it seems as though we are just a fly on the wall; in the shower scene we can see the silhouette creeping up on Marion yet she is totally unaware. Then also in Aborgast's murder scene we have a bird's eye view and see the murder a split second before Abogast himself. We want to help but can't, Hitchcock successfully directs us to feel helpless and powerless and we obey. Music has a key role in "Psycho"; because there is no colour in this film the audience seems to have more attention for other things. The music in Psycho is very sinister, high-pitched and has a high tempo; it adds a lot of tension and suspense in the audience. When Hitchcock wants to make the scene more dangerous the tempo will perhaps increase, along with the volume. For example the driving scene; without the music wouldn't have seemed half as dangerous; but with the lighting, camera shots and music combined the atmosphere can be completely changed to suit Hitchcock's need. "Psycho" is a very strongly constructed film. It goes against the audience's expectations and is created by a master craftsman who knows exactly what he's doing and why. ...read more.