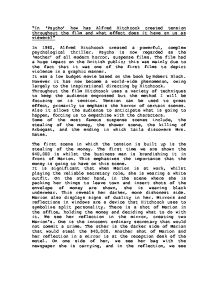 &quot;In 'Psycho' how has Alfred Hitchcock created tension throughout the film and what effect does it have on us as viewers

"In 'Psycho' how has Alfred Hitchcock created tension throughout the film and what effect does it have on us as viewers?" In 1960, Alfred Hitchcock created a powerful, complex psychological thriller. Psycho is now regarded as the 'mother' of all modern horror, suspense films. The film had a huge impact on the British public; this was mainly due to the fact that it was one of the first films to depict violence in a graphic manner. It was a low budget movie based on the book by Robert Bloch. However it has now become a world-wide phenomenon, owing largely to the inspirational directing by Hitchcock. Throughout the film Hitchcock uses a variety of techniques to keep the audience engrossed but the method I will be focusing on is tension. Tension can be used to great effect, primarily to emphasis the horror of certain scenes. Also it allows the audience to anticipate what is going to happen, forcing us to empathise with the characters. Some of the most famous suspense scenes include, the stealing of the money, the shower scene, the killing of Arbogast, and the ending in which Laila discovers Mrs. Bates. The first scene in which the tension is built up is the stealing of the money. The first time we are shown the $40,000 is whilst the business man is brandishing it in front of Marion. This emphasizes the importance that the money is going to have on this scene. It is significant that when Marion is at work, whilst playing the reliable secretary role, she is wearing a white outfit. On the other hand, in the scene where she is packing her things to leave town and insert shots of the envelope of money are shown, she is wearing black underwear. This reveals her darker, more dishonest side. Marion also displays signs of duality in her. Mirrors and reflections in windows are a device that Hitchcock uses to symbolize split personality. ...read more.

As the silhouette rips the curtain open the camera immediately jumps around to a point of view shot, showing us what the killer is seeing - Marion showering. This sudden change of view emphasizes how unexpected this event is; I also believe that Hitchcock used the killer's view to show the audience Marion's horror and fright. Now the real effect of the scene is delivered, the camera switches between the squirming Marion and the killer's knife. The shrieking music erupts, almost making us believe it is Marion who is shrieking. The shower made a rhythmic and diagetic sound that contrasted with the high-pitched non-diagetic sounds of violins. The shots are swift and precise, each lasting no more than two seconds; this highlights the stabbing and the brutality of the thrusting knife. With each separate shot it makes the audience gasp, highlighting the viciousness of the attack, to a 1960's audience, this probably would have made them scream. The black shadow of the psychopath is contrasted brilliantly by the bright light of the bathroom and makes the audience feel insecure about the anonymous silhouette. After the stabbing the camera pans down towards the bathtub that is now flowing with blood, this slow panning indicates the murder is over. The low pitched, loud music also corresponds to this impression. We are then shown a close up of the water and the blood running down the plug hole this represents Marion's life draining away, this shot then dissolves into a close up of her eye, the camera then slowly zooms out. There is a droplet of water artfully placed beneath her eye; this could almost be interpreted as a tear. The brilliance of the scene is the fact that we never actually see the murder weapon sinking into the skin, which leaves a lot to our imagination and increased the horror and fear. Throughout the scene there is a strong sense of the light representing good and the darkness representing evil. ...read more.

Sam grabs the attacker from behind. Lila is not screaming. She is watching in disbelief as, in the ensuing struggle, the woman's wig falls off and the dress falls open, revealing the face and figure of Norman Bates. This shocks the audience, for only moments ago we believed the killer to be Mrs. Bates. In Norman's face is a silent scream, in his arched torso a psychological battle, His two schizophrenic personalities are fighting with each other, Norman Bates the calm, loving caretaker dies, his mother a cruel wicked murderess to take over permanently. The searing violin sounds of the murders before are reprised as we gaze back at his mother, whose wrinkled, mummified flesh thinly coats her facial bone. In the hollows of her eyes the swinging lamp throws shadow over the gaunt skull, bringing the mother alive. In conclusion, I feel Hitchcock's use of tension throughout the film created atmosphere, suspense and was the key to the films success. The film has revolutionized the way today's directors approach creating a thriller/horror movie. The film may be viewed as slightly tame by some, but for a 1960's director to still be able to shock and retain a twentieth century audience is highly impressive. The clever thing about the film is the viewers never actually see the murder weapon sinking into the skin, which left a lot to the viewer's imagination and increased the horror and fear. The tension methods, which include Diagetic and Non-diagetic sounds, camera angles, lighting, the setting and his use of symbolism, were use very effectively and created vast amounts of tension when required. He has clearly considered each individual camera shot, every single symbolic prop in order to give the intended effect. I believe the use of lighting used to depict the good/ evil effect, was the most effective technique used. I also think the film would not have had the same impact had it not been made in black and white. This was a superb film and will go down in history as one of the all time greats. Edward Fry 10w1 3161 words ...read more.