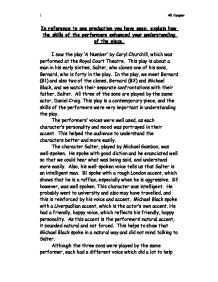 In reference to one production you have seen, explain how the skills of the performers enhanced your understanding of the piece.

In reference to one production you have seen, explain how the skills of the performers enhanced your understanding of the piece. I saw the play 'A Number' by Caryl Churchill, which was performed at the Royal Court Theatre. This play is about a man in his early sixties, Salter, who clones one of his sons, Bernard, who is forty in the play. In the play, we meet Bernard (B1) and also two of the clones, Bernard (B2) and Michael Black, and we watch their separate confrontations with their father, Salter. All three of the sons are played by the same actor, Daniel Craig. This play is a contemporary piece, and the skills of the performers were very important in understanding the play. The performers' voices were well used, as each character's personality and mood was portrayed in their accent. This helped the audience to understand the characters better and more easily. The character Salter, played by Michael Gambon, was well-spoken. He spoke with good diction and he enunciated well so that we could hear what was being said, and understand more easily. ...read more.

B2 had a very different stance to B1 which helped to show the audience that he was a different character, with different emotions. B2 sat and leant forward which showed the audience that he is open. This openness is reinforced when he tells the truth about his feelings to Salter. B2 was probably so open with Salter because he had brought him up, and they knew each other, and he did not have the same feelings of hate that B1 obviously had. Michael Black stood loosely and he had a very welcoming and open stance. He used a lot of gesticulation because he wanted to openly discuss things with Salter. Salter, on the other hand, stood and sat very hunched up. This showed the audience his age and his weakness; he is very worn out with life altogether. The fact that he was so hunched up also shows that he is hiding things and is not an honest character. He used sharp, tense and rigid hand movements to get his point across. The use of stance by the performers definitely enhanced my understanding of the play. ...read more.

The performers used these various facial expressions to convey to the audience the feelings of the characters and help them to understand, whether the characters are angry, open, naive or anything else. Another skill used by the performers to enhance my understanding of the piece was eye contact. This helped the audience to understand the relationship between the characters and how they feel about one another. B1 did not have a lot of eye contact with Salter. This shows that he does not want anything to do with him, and there are no bonds between them. B2, however, held close eye contact with Salter which gave an intimate atmosphere and showed that there is an intense relationship between B2 and Salter. Finally, Michael Black tried to make eye contact with Salter because he is an open and interested character. However, Salter is untrustworthy and so he avoided this eye-contact. The use of eye contact helped me to understand how different the relationships were between Salter, and each of the three clones featured in the play. In conclusion, all of these performing skills helped me to understand the play, even though it is a very contemporary piece. If any one of these skills was lacking, it would be a lot more difficult to understand the piece. 1 Ali Cooper ...read more.