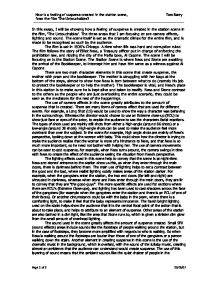 In this essay, I will be showing how a feeling of suspense is created in the station scene in the film, 'The Untouchables'. The three areas that I am focusing on are camera effects, lighting and sound.

In this essay, I will be showing how a feeling of suspense is created in the station scene in the film, 'The Untouchables'. The three areas that I am focusing on are camera effects, lighting and sound. The scene itself is set as the dramatic climax for the entire film, and is made to be recognised as such by the audience. The film is set in 1930's Chicago. A time when life was hard and corruption ruled. The film follows the story of Elliot Ness, a Treasury officer put in charge of enforcing the prohibition law, and ridding the city of the Mafia boss, Al Capone. The scene I will be focusing on is the Station Scene. The Station Scene is where Ness and Stone are awaiting the arrival of the Bookkeeper, to intercept him and have him serve as a witness against Al Capone. There are two main character elements in this scene that create suspense, the mother with pram and the bookkeeper. ...read more.

The lighting effects used in this scene help to convey that the scene is at night-time. Ness and stones' entrance to the station show us this, as when they enter through the main doors, there is darkness behind them. The main use of lighting helps to set a contrast between the good and the bad, where realist lighting subtly makes areas of the station darker. For example, when the gangsters enter the station, the two end doors (far left and right) are shrouded in darkness, whereas when stone and Ness enter through the main doors, they are lit to convey that they are "the good-guys". The more specific effects are used for sections where there are ECU's (Extreme Close-ups), and lighting has been used to cast shadows across the face of the gangsters (for example when the gangsters enter the station and there is an ECU of one of their faces). Or another circumstance could be with the baby in the pram, where there is a comforting light, to make it feel that the baby represents innocence. ...read more.

At some points, the sounds are selectively used. An instance of this is where the baby's pram starts to roll down the stairs, and the mother leaps forward, and whilst you see her say what appears to be 'My Baby!' you do not hear it, yet you hear the sound of the pram wheels on the stairs. Another point where the sound is used differently is where the pram is rolling down the stairs, and the sound of the pram wheels merge with the sound of the gunshots. I feel that with the points about the cameras creating suspense using ECU's and Long shots, as well as the lighting with realist effects and the sound with the dramatic music, a successful feeling of suspense is created in the station scene. The suspense could have been improved if, there were more discerning lighting effects, and coupled with the dramatic music, would have perhaps created a better feeling of suspense. How is a feeling of suspense created in the station scene, from the film 'The Untouchables'? Tom Barry Page 1 of 2 02/05/07 ...read more.