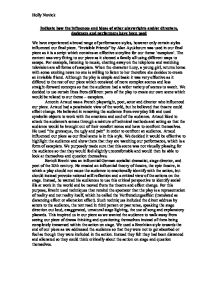 Indicate how the influences and ideas of other playwrights and/or directors, designers and performers have been used

Indicate how the influences and ideas of other playwrights and/or directors, designers and performers have been used We have experienced a broad range of performance styles, however only certain styles influenced our final piece. "Invisible Friends" by Alan Ayukbourn was used in our final piece as it is a script which contains an effective storyline for our theme 'escapism'. The content was very fitting to our piece as it showed a family all using different ways to escape. For example, listening to music, chatting away on the telephone and watching television are all forms of escapism. When the character Lucy, a young girl, returns home with some exciting news no one is willing to listen to her therefore she decides to create an invisible friend. Although the play is simple and basic it was very effective as it differed to the rest of our piece which consisted of more complex scenes and less straight-forward concepts so that the audience had a wider variety of scenes to watch. We decided to use certain lines from different parts of the play to create our own scene which would be related to our theme - escapism. ...read more.

Such techniques included the direct address by actors to the audience, the text read in third person or past tense, speaking the stage direction out loud, exaggerated, unnatural stage lighting, the use of song and explanatory placards. This inspired us in our piece as we wanted the audience to walk away from seeing our piece of drama thinking and questioning themselves instead of them being completely immersed within the action on stage. We used a Brechtian style towards the end of our piece as we addressed the audience so that they were not to get absorbed or feel as though they were included in the action. Instead they felt they had been distanced and alienated so they could think critically about the action on stage and question themselves. Previously, we visited "The Institute of Contemporary Arts" (ICA) and watched a selection of short films to help inspire us into gaining new and fresh ideas for our piece. A particular film called "Hylje/Seal" included heavy breathing in complete darkness. This technique sounds extremely simple however it managed to make the audience feel tense and uncomfortable and yet it was so straightforward. ...read more.

We also used the text, "Agnes of God" by John Pielmeier to create a scene which would allow us to include religion. This was influential as at the beginning of our rehearsal process we all felt religion was a form of escapism and so we felt it was important to include it in our final piece. Having read the play, we managed to select certain lines to create a new scene which suited our piece; however we had to also include our own lines as we needed to make sure the scene was relevant to our theme. We performed the scene naturalistically in comparison to our other scenes, even though the storyline is quite unrealistic. The play is about a psychiatrist who tries to determine how a twenty-one-year-old nun came to murder her newborn child. The play raises provocative questions about the nature of religious belief. However, for our piece we showed the doctor and Agnes speaking and showing how Agnes did not understand where babies came from. This is quite funny and allows our piece to include an element of comedy without it looking as though it has been overdone. ?? ?? ?? ?? Holly Novick ...read more.