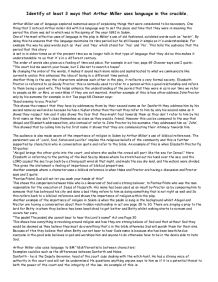 Language for The Crucible

Identify at least 3 ways that Arthur Miller uses language in the crucible. Arthur Miller use of language explored numerous ways of explaining things that were considered to be necessary. One thing that I noticed Arthur miller did with his language was to set the place and time that they were in meaning the period the story was set in which was in the spring of the year 1692 in Salem. One of the most effective uses of language in the play is Miller's use of old fashioned, outdated words such as 'harlot'. By doing this he ensures that the language maintains its time period but he still keeps it simple so it's understandable. For example the way he uses words such as 'Aye' and 'Nay' which stand for 'Yes' and 'No'. This tells the audience that the period that this story is set is in olden times as at the present time we no longer talk in that type of language that they did so this makes it understandable to us that it's in a different century. The order of words also gives us a feeling of time and place. For example in act two, page 69 Cheever says and I quote: "The court bid me search your house, but I like not to search a house". ...read more.

Danforth - he is the Deputy Governor, head of the court case dealing with the witch-hunt. He has a strong voice of authority in the court and will not be undermined. He questions anything anyone says to him as if it is a potential threat to both the power of the court and the integrity of the law. An example of this is: '[to GILES]: Old man. If your informant tells the truth let him come here openly like a decent man. But if he hides in anonymity I must know why. Now sir, the government and central church demand of you the name of him who reported Mr. Thomas Putman a common murderer." Act Three page 88 This shows the power that Danforth has over the others as he is the deputy Governor and by the way that he speaks makes him sound much wiser then the rest. By using the government and the church as a reason to confess shows that he has this power over them as the Church is seen as a symbol of god in which they must not lie as it will be seen as a sin and the law of the government and the church's rules are gods rules and no one must disobey them. ...read more.

This creates confusion for the audience as they start to question if the children are going to much power and if they do if it all goes out of hand. In Act Three the most tension built up is the scene where Abigail is denying to having lied and then blaming it on Marry Warren making it look like she is sending her spirits out on her and then starts to repeat everything Mary is saying. " [now staring full front as though hypnotized, and mimicking the exact tone of MARY WARREN'S cry]: she sees nothing'!. " This creates tension as Abigail has this power over the court scene and this makes the audience think what is going to happen next, is proctor going to do something about this or not. It also makes us wonder why can they only repeat Mary and does she really have this power over the girls. I think that overall Arthur Miller has used his language extremely well to set the place and time and the way that he has used short lines ,made it better to build up a climax as it was much more faster paced and snappy. Also his use of language to differentiate between characters was very effective as everyone's personality is clearly depicted and no one was similar to another character. ...read more.