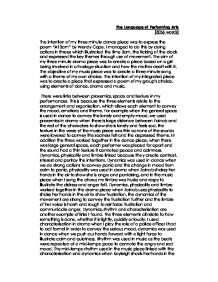 The Language of Performing Arts [3056 words] The intention of my three minute dance piece was to express the poem "At 3am" by Wendy Cope. I managed to do this by doing actions in threes which illustrated the time 3am, the ticking of the clock and expressed the key themes through use of movement. The aim of my three minute drama piece was to create a piece based on a girl being involved in a hostage situation and how the mother dealt with it. The objective of my music piece was to create a three minute song with a theme of my own choice. The intention of my integrated piece was to create a piece that expressed a poem of my group's choice, using elements of dance, drama and music. There were links between proxemics, space and texture in my performances. This is because the three elements relate to the arrangement and organisation, which allows each element to convey the mood, emotions and theme. For example when the general space is used in dance to convey the lonely and empty mood, we used proxemics in drama when there is large distance between Zainab and the rest of the characters to show she is lonely and feels sad, the texture in the verse of the music piece was thin as none of the sounds were layered to convey the sadness felt and the depressed theme. In addition the three worked together in the dance piece; when there was large general space, each performer was placed far apart and the sound had a thin texture it connoted peace and calmness. Dynamics, physicality and timbre linked because they create contrast, interest and portray the intentions. Dynamics was used in dance when we do strong actions to convey panic and the change in mood from calm to panic, physicality was used in drama when Zainab shakes her hands in the air to show she is angry and panicking, and in the music piece when I sang the chorus my timbre was husky and raspy to illustrate the distress and anger felt. ...read more.

Physicality was important to show the audience that my character is comforting Zainab so I touch her arm to signify this. In the drama piece dialogue, proxemics, tension, characterisation and physicality were all important as each other as each aspect played a part throughout the piece. The melody was divided into three parts; "you used to love me", "why don't you love me" and "how" were sung at the same time giving a layered effect, this made the melody strong, catchy and tuneful. In the bridge we harmonised singing "how" at different pitches to create a minor key which connoted sadness. There were four beats in each bar, the rhythm was mid-tempo but the song was sung slowly, the mid-tempo rhythm along with the slow harmony created a minor and major key which additionally created juxtaposition. In the verses the texture is thin to highlight the lonely sad mood. The timbre of Kudsie's voice was deep, thick and husky. The melody was the most important aspect as it would be the only part of the piece that would not be changed when repeated therefore it had to be the most memorable, catchy, tuneful and pleasant. The integrated piece began with Zainab singing in a minor key, her timbre was soft, slightly husky yet smooth. This linked with the dynamics because each movement was very light. In addition we were arranged in different corners of the stage. The timbre, dynamics and proxemics were all interrelated because the timbre was soft, slightly husky yet smooth, the dynamics were light and slow, the actions were in unison to emphasise the emotion and we were arranged far apart, the use of these techniques enabled us to illustrate the sad, lost feelings of the main character and the isolated, lonely mood. Paullina says "she was all alone" in a low, husky voice. As she says this all the members spin away from Zainab (the main character) using strong assertive arms into a curled ball to match the word "alone". ...read more.

My group managed to successfully create a drama piece on the stimulus given; we created the intended effects by using freeze frames, thought-tracking and cross-cutting. These techniques were effective because freeze-frames gave clues about the people and the situation, thought-tracking showed how the characters were feeling and thinking, this deepened the performance and the audience became more involved. Cross cutting made the drama unpredictable making it more interesting, it also allowed the action to be broken enhancing the tension. We received a positive reaction from the audience which is what we expected. Before the music performance my group did a range of vocal exercises to warm our voices. We created the effects we planned to with the song and achieved what we intended to achieve which was create a catchy, strong, memorable song. We did receive the audience reaction we expected which was members of the audience singing the song themselves when we had finished our performance. Through devising my dance piece I have learnt how to express the mood through use of actions, relationships, dynamics, space and motif. From devising my drama piece I have learnt how to develop my characterisation, how to use proxemics effectively, found ways to create tension and gained a better understanding of how to use dialogue and physicality. Through my music piece I have learnt the important factors for creating a song, how to harmonise, create a catchy melody, how to chose the right texture and timbre to dictate the mood and make rhythm for a song. Through devising the integrated piece I have learnt how to use music, drama and dance together, the importance of rehearsal and how to use the techniques of the three art forms together. From creating all four pieces I have learnt that teamwork, co-operation, hard work, rehearsal in your performance space and determination are needed for the process of improvising-rehearsing-performing. The improvising-rehearsal-performing process has taught me how to express my ideas, to be creative and improvisation, rehearsal and performance techniques I can use in the future. ...read more.