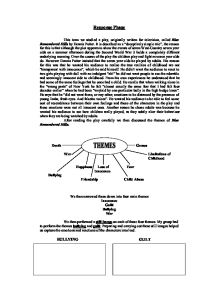 Response Phase This term we studied a play, originally written for television, called Blue Remembered Hills by Dennis Potter. It is described as a "deceptively simple tale", the reason for this is that although the plot appears to show the events of seven West-Country seven year olds on a summer afternoon during the Second World War it holds a completely different underlying meaning. Over the course of the play the children play and fight as seven year olds do. However Dennis Potter insisted that the seven year olds be played by adults. His reason for this was that he wanted his audience to realise the true realities of childhood are not "transparent with innocence", which he said himself. He didn't want the audience to react to two girls playing with doll with an indulgent "ah!" he did not want people to see the adorable and seemingly innocent side to childhood. From his own experiences he understood that he had some of the same feelings that he once had a child. He recalls that when walking alone in the "wrong parts" of New York he felt "almost exactly the same fear that I had felt four decades earlier" when he had been "waylaid by one particular bully in the high hedge lanes". ...read more.

BULLYING GUILT BULLYING: Levels were very important in this still image as they helped show the different status of each character. With this in mind, we decided to have one character on a lower level than the others. This character was kneeling down curled up, whilst the other was standing in a tall and confident way towering over him/her. This made it obvious to the audience who was in control of the situation. Also the positioning of the characters was important. We wanted to show how the one being bullied wanted to create distance but that the other wanted to dominate the situation. We did this by having the one being bullied shrinking away shielding their face. To show how the character in charge was bullying the other they were pointing and laughing whilst they had a slightly angry expression on their face. GUILT: I found this still image harder to create. We decided to have one character accusing another, whilst the accused character being the centre of attention so as to show they were guilty. ...read more.

* Whilst playing I never stopped to think about whether I was tired or not, but once I stopped playing I realised I was very out of breathe. * I was surprised at how much energy I had and how I continued to feel energised even after I had stopped playing. * I also noticed how whilst we were playing, there had been no boundaries between any of the students and that we didn't care if the person we were chasing or running away from was a boy or a girl or if they were our friend or not. We then discussed the similarities between our behaviour whilst playing tag and the behaviour of seven year olds. I realised that without any preparation we had already imitated the behaviour of children. I realised how all the actions feelings I had whilst playing tag I had already had when I was seven years of age (this reminded me of Dennis Potter's Quote which I included in the first paragraph). I noticed that many of the things I did when role playing, were things that a seven year old would do as well. For example, how I never stopped running or moving even when I was tired and out of breathe. ...read more.