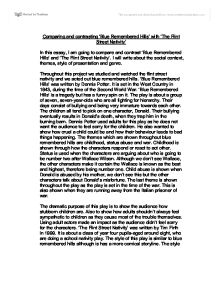 In this essay, I am going to compare and contrast Blue Remembered Hills and The Flint Street Nativity. I will write about the social context, themes, style of presentation and genre.

Comparing and contrasting 'Blue Remembered Hills' with 'The Flint Street Nativity' In this essay, I am going to compare and contrast 'Blue Remembered Hills' and 'The Flint Street Nativity'. I will write about the social context, themes, style of presentation and genre. Throughout this project we studied and watched the flint street nativity and we acted out blue remembered hills. 'Blue Remembered Hills' was written by Dennis Potter. It is set in the West Country in 1943, during the time of the Second World War. 'Blue Remembered Hills' is a tragedy but has a funny spin on it. The play is about a group of seven, seven-year-olds who are all fighting for hierarchy. Their days consist of bullying and being very immature towards each other. The children all tend to pick on one character, Donald. Their bullying eventually results in Donald's death, when they trap him in the burning barn. Dennis Potter used adults for this play as he does not want the audience to feel sorry for the children. He also wanted to show how cruel a child could be and how their behaviour leads to bad things happening. ...read more.

'Blue Remembered Hills' is also a comedy though as many aspects of the play are funny. In 'The Flint Street Nativity' the story line is very different but it has the same genre, comedy, this is because the play has been made to be funny, such as when they are looking for the escaped lizard. It is also slightly tragic as one boy is bullied for his speech difficulties. Dramatic devices are used throughout each play, such as suspense, monologues and multi-rolling. In 'The Flint Street Nativity' there is multi-rolling as the actors going from being the children to adults. In 'Blue Remembered Hills' suspense is used when they are hiding from the escaped prisoner of war. During this project, I have learnt how to read lines and make up stage directions. It is also very easy for me to speed read now, which proves I know my lines. When looking at scripts, I now know how to read stage directions and put them onto the stage. Whilst studying 'Blue Remembered Hills' we watched 'The Flint Street Nativity'. This helped as it showed us how adults acted as children; they made their movements very over the top and looked always excited. This helped as I then knew how to act like a child and move like one. Beth Pink ...read more.