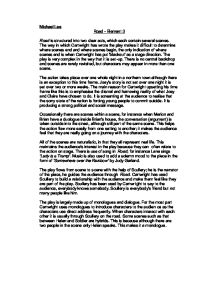 Road is structured into two clear acts, which each contain several scenes.

Michael Lee Road - Element 3 Road is structured into two clear acts, which each contain several scenes. The way in which Cartwright has wrote the play makes it difficult to determine where scenes end and where scenes begin, the only indication of where scenes end is when Cartwright has put 'blackout' as a stage direction. The play is very complex in the way that it is set-up. There is no central backdrop and scenes are rarely revisited, but characters may appear in more than one scene. ...read more.

It is producing a strong political and social message. Occasionally there are scenes within a scene, for instance when Marion and Brian have a duologue inside Brian's house, the conversation (argument) is taken outside into the street, although still part of the same scene. This helps the action flow more easily from one setting to another; it makes the audience feel that they are really going on a journey with the characters. All of the scenes are naturalistic, in that they all represent real life. This maintains the audience's interest in the play because they can often relate to the action on stage. ...read more.

Cartwright has used Scullery to build a relationship with the audience and make them feel like they are part of the play. Scullery has been used by Cartwright to say to the audience, everybody knows somebody. Scullery is everybody's friend but not many people like him. The play is largely made up of monologues and dialogue. For the most part Cartwright uses monologues to introduce characters to the audience as the characters use direct address frequently. When characters interact with each other it is usually through Scullery on the road. Some scenes such as that between Helen and Soldier are hybrids. This is because although there are two people in the scene only Helen speaks. This makes it a monologue. ...read more.