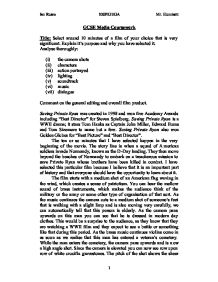 Select around 10 minutes of a film of your choice that is very significant. Explain it's purpose and why you have selected it - Saving Private Ryan.

GCSE Media Coursework Title: Select around 10 minutes of a film of your choice that is very significant. Explain it's purpose and why you have selected it. Analyse thoroughly: (i) the camera shots (ii) characters (iii) action portrayed (iv) lighting (v) soundtrack (vi) music (vii) dialogue Comment on the general editing and overall film product. Saving Private Ryan was created in 1998 and won five Academy Awards including "Best Director" for Steven Spielberg. Saving Private Ryan is a WWII drama; it stars Tom Hanks as Captain John Miller, Edward Burns and Tom Sizemore to name but a few. Saving Private Ryan also won Golden Globes for "Best Picture" and "Best Director". The ten or so minutes that I have selected happen in the very beginning of the movie. The story line is when a squad of American soldiers invade Normandy, known as the D-Day landing. They then move beyond the beaches of Normandy to embark on a treacherous mission to save Private Ryan whose brothers have been killed in combat. I have selected this particular film because I believe that it is an important part of history and that everyone should have the opportunity to learn about it. The film starts with a medium shot of an American flag waving in the wind, which creates a sense of patriotism. You can hear the mellow sound of brass instruments, which makes the audience think of the military or the army or some other type of organisation of that sort. ...read more.

A POV shot is used to show the enemy firing against the American soldiers. This creates balance as you see what is happening from both sides. Another medium shot is used to show the unloading of more soldiers onto the shore. As the soldiers are jumping out of their landing craft, the camera follows them as they fall below the water line. As it does so a sense of tranquillity is acquired and underwater seems to be a place of refuge. Although, while the camera is underwater shots are still being fired and soldiers are still being shot dead. To the audience there seems to be no place where anyone can take cover. The camera still rises and sinks below the water line, the sound distorting as this happens. A medium shot is used as the camera pans slowly inland towards the shore. Continuous shots are whistling through the air and special sound effects are used to create the noise of bullets entering the bodies of the soldiers. We continue to see the point of view of the enemy soldiers as they shoot at the American soldiers down below on the beach. More sound effects are used to emphasise the use of bullets and shells. A medium, panning shot is used to show the American soldiers moving inland. By using a medium shot you can still pick up certain details but still be able to show how large these groups are. ...read more.

It seems to the audience that he is running away from a kind of "safety". It becomes apparent that he is going to shoot at the exposed enemy bunker. A close up shot shows his emotions as he tightens his finger on the trigger and then shoots dead an enemy soldier. The camera then cuts back to the group of soldiers lying on the sand bank, and then another close up shot of the soldier who has just fired against the enemy. Again he shoots at the enemy and then the bunker collapses. As enemy soldiers fall from the bunker the group lying on the sand bank shoot them dead. As this area is clear the group of soldiers move more inland, the camera pans along with them as they do so. We continue to see at a high angle even more American soldiers moving inland. The group of soldiers have found the building where the enemy soldiers are shooting. The group huddle together as one of the soldiers throws a grenade near the building. The group brace themselves for the explosion and they duck behind a wall, the camera goes down with them too, as if you're a part of the action as well. The group then wait for any enemy soldiers who escape the building, creating suspense as this happens, even though there is no music playing to establish it. The group fire a flammable gas into the building and then one of the soldiers fires a flamethrower into it and the building explodes killing all the enemy soldiers within it. Ian Russo 10SP/G1/GA Mr. Hunnisett 1 ...read more.