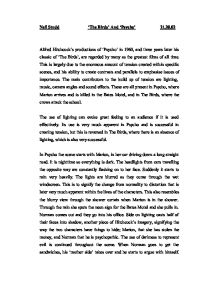 'The Birds' And 'Psycho'

Neil Studd 'The Birds' And 'Psycho' 21.20.02 Alfred Hitchcock's productions of 'Psycho' in 1960, and three years later his classic of 'The Birds', are regarded by many as the greatest films of all time. This is largely due to the enormous amount of tension created within specific scenes, and his ability to create contrasts and parallels to emphasise issues of importance. The main contributors to the build up of tension are lighting, music, camera angles and sound effects. These are all present in Psycho, where Marion arrives and is killed in the Bates Motel, and in The Birds, where the crows attack the school. The use of lighting can evoke great feeling to an audience if it is used effectively. Its use is very much apparent in Psycho and is successful in creating tension, but this is reversed in The Birds, where there is an absence of lighting, which is also very successful. In Psycho the scene starts with Marion, in her car driving down a long straight road. It is nighttime so everything is dark. The headlights from cars travelling the opposite way are constantly flashing on to her face. Suddenly it starts to rain very heavily. The lights are blurred as they come through the wet windscreen. This is to signify the change from normality to distortion that is later very much apparent within the lives of the characters. ...read more.

The most commonly used camera angle is a low angle shot. This is used every time we see the Bates' house. This type of shot makes whatever it is focusing on seem powerful and makes the audience feel vulnerable as they are lower down. This is also apparent when Marion and Norman are sitting in the parlour; Norman always appears higher up. At one point when Marion mentions 'some place' Norman leans right into the camera as if to close up on the audience. This makes them realise that mental institutions are very significant to Norman's life, Perhaps he has even been in one. In the shower scene there are 48 camera shots. It starts off with Marion in the shower washing herself. The camera is at her eye level giving a relaxed feeling and relief from the anxiety of the previous conversation in the parlour. Next there is a point of view shot looking up at the water coming out of the shower. She is enjoying the shower and is calm and happy. She turns around so that she has her back to the shower curtain and we see a figure approach slowly from behind. This is a big leap for the audience from being relaxed, to the highest point of tension in the whole film. The shower curtain is ripped back to reveal the silhouette of a figure grasping an enormous bread knife. ...read more.

During the Motel scene it is the lower, tension-creating piece that is played, starting at a place of significance or tension within the film, like when Norman starts to talk about taxidermy and when Marion is looking for a place to hide the money. During the shower sequence there is no music to start off with. All we can hear is the sound of the shower. This is done to mask the sounds that the killer would make coming into the room. When she rips back the she shower curtain we get shrill, high pitch notes and the sound of her scream. This, combined with the sound of the knife penetrating her body, gives us the image in our minds that we see her getting slashed with a knife. In The Birds this is a very different story. The children start to sing at the very beginning and do not finish until the children leave the school. They chant an extremely repetitive tune but at the same time it does give a sense of ease within the school. Because the song is so repetitive it will stick in the audiences mind after the film has ended. This makes the scene more memorable. Even though the two films are very different, both make exiting viewing and to some extent fulfil their roles as horror films. They have lost some of their emotion evoking properties in this day and age as explicit subjects have become more accepted by today's society. Even though they both make exciting viewing. ...read more.