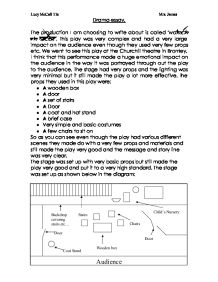 The production I am choosing to write about is called 'woman in black'.

Drama essay. The production I am choosing to write about is called 'woman in black'. This play was very complex and had a very large impact on the audience even though they used very few props etc. We went to see this play at the Churchill theatre in Bromley. I think that this performance made a huge emotional impact on the audience in the way it was portrayed through out the play to the audience. The stage had very props and the lighting was very minimal but it still made the play a lot more effective. The props they used in this play were: * A wooden box * A door * A set of stairs * A Door * A coat and hat stand * A brief case * Very simple and basic costumes * A few chairs to sit on So as you can see even though the play had various different scenes they made do with a very few props and materials and still made the play very good and the message and story line was very clear. The stage was set up with very basic props but still made the play very good and put it to a very high standard. The stage was set up as shown below in the diagram: The basic outline to the play is that there is an elderly lady who had passed away and the actor who plays Mr. ...read more.

and there were not many sound effects apart from those of the horse's hooves and those of the birds and insects in the woods! The other part was when they were in the house and the woman in black was in there with them but they didn't know it. The part which had a lot of impact was when the man went into a room in her house where there was a nursery and they were looking for some items belonging to the woman and then they left the room and the woman in black went into the room after and it was all messed up and she was sitting on the baby rocking chair looking out to the audience and all you could see was her face and nothing else which had a huge emotional and scary impact. The part, which I felt especially had the most emotional impact on the audience, was the part when the woman in black was in the house with the other two characters but they didn't know she was there and she was following them around and when they left one room she would then go in there and move every thing around and mess it all up to confuse them. The part, which springs to mind when I think of this, is when the old man was in the child's nursery and then he went into another room so the woman in black went in after him and was sitting on the ...read more.

The way in which the actors moved during the play also had an effect because when the atmosphere was more open and overt the actors movements around the stage were a lot more wide and dramatic, where as when the actors were in the same place as the woman in black they changed and as they were scared their actions became more closed and covert and were a lot lees exaggerated. There were in which the actors acted and their relationship towards each other was very natural and there were no abnormal or strange actions when they were around each other. Their actions and their movement around each other was very typical when they were in a normal situation but when they were in the 'haunted' house they suddenly changed and their relationship towards each other became very close and they were a lot less humorous! And finally, the characterisation of the actors was also very good and was done at a very high standard. Even though there were three main characters and only two of the were changing their role all the time. The actors still adapted and changed to their next character as soon as possible and they immediately changed the way they spoke, acted and their total life style. These four things helped to add impact on the audience because as they were changing around so quickly we had to get used to and adapt to it all and even in some cases it was rather scary the way they changed so quick it became shock! Lucy McCall 11e Mrs. James ...read more.