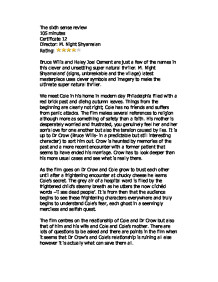 The sixth sense review 105 minutes Certificate 12 Director: M. Night Shyamalan Rating: Bruce Willis and Haley Joel Osment are just a few of the names in this clever and unsettling super natural thriller. M. Night Shyamalans' (signs, unbreakable and the village) latest masterpiece uses clever symbols and imagery to make the ultimate super natural thriller. We meet Cole in his home in modern day Philadelphia filled with a red brick past and dieing autumn leaves. Things from the beginning are clearly not right; Cole has no friends and suffers from panic attacks. The film makes several references to religion although more as something of safety than a faith. ...read more.

The grey air of a hospital ward is filled by the frightened child's steamy breath as he utters the now clich�d words -'I see dead people'. It is from then that the audience begins to see these frightening characters everywhere and truly begins to understand Cole's fear, each ghost in a seemingly merciless and selfish quest. The film centres on the relationship of Cole and Dr Crow but also that of him and his wife and Cole and Cole's mother. There are lots of questions to be asked and there are points in the film when it seems that Dr Crow's and Cole's relationship is ruining all else however it is actually what can save them all. ...read more.

The film brings up the theme of communication and relationships. It is heart breaking to watch Cole's mother (Toni Colette) desperately trying to work out what is wrong with her son and where the scratches on his arm came from. It is only when Cole communicates properly with his mother and with the ghosts that haunt him that he can take control of the situation. It also raises the question of letting go and loss between Dr Crow and is wife (Olivia Williams), which again can only really be sorted through communication. It is this that will be the main message I take from the film. This frightening film stirs up many emotions and is ultimately very successful. It has the power to make you think, scream and shudder. Although possibly slow to start the pace soon quickens, ending with one final twist! Caitlin Devereux ...read more.