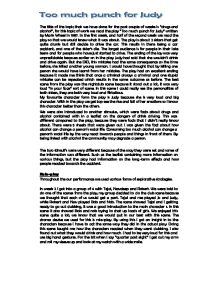 The title of the topic that we have done for the past couple of weeks is "drugs and alcohol", for this topic of work we read the play "Too much punch for Judy" written by Mark Wheel in 1987. In the first week, and half of the second week we read the play so that we would knew what it was about. The play is about 2 sisters that get quite drunk but still decide to drive the car. This results in there being a car accident, and one of the sister's die. The target audience is for people in their late teens and for people who have just started to drive. The ending of the lay was very unpredictable because earlier on in the play Judy had said that she wouldn't drink and drive again. But she DID, this mistake had the same consequence as the time before, she killed another young woman. I would have thought that by killing one person she would have learnt from her mistake. The play had an excellent ending because it made me think that once a criminal always a criminal and one stupid mistake can be repeated which results in the same outcome as before. The best scene from the play was the nightclub scene because it stood out a lot, it was very loud "in your face" sort of scene. In this scene I could really see the personalities of both sisters, they are both very loud and flirtatious. My favourite character form the play is Judy because she is very loud and big character. With in the play we get top see the rise and fall of her emotions so I know this character better than the others. We were also introduced to another stimulus, which were facts about drugs and alcohol contained with in a leaflet on the dangers of drink driving. ...read more.

We had Kyle come to my house after a long time and he just sits down and we start talking like normal as in what he's been up to. I then asked if he wanted a drink but he said no but I still got him one. I then froze and Kyle said what he was really thinking, "she wouldn't be offering me that if she knew what I'd done" I then suggested that we should go out clubbing because we hadn't seen each other for such a long time. But Kyle said no he said he didn't feel up to it, but Kylie and me said that we were going to get changed, as we walked off behind Kyle. But Kylie and me then became Kyle's conscience I was the bad and Kylie was the good. I said things such as his friends would never trust him again and that "he had killed someone" "once a murderer always a murderer". Kylie said nice reassuring things to him such as his "friends would always stick by him" and that "it was a mistake". In that week we also made a conscience ally scene about the crash from the play, my group decided to do the conscience ally for the man that was at the crash scene first. Navdeep was the one playing the man, and the rest of us were saying various things, we were either telling him to go help the girls or we were telling him to stay at home and not get involved. We also marked the moment in this scene right at the end when we were telling him go when Tejal said, "WAIT" we all froze and just stared at Navdeep for the audience could think for themselves about what would happen next. The five facts that the we were given are > You cant calculate your alcohol limit > Alcohol takes effect quickly, but wears off slowly > Any amount of alcohol will effect your judgement > Drinking and driving has lasting consequences (the one my group did) ...read more.

This moment was very good because it was last bit in the scene so it was an image that everyone has to remember. In week 5 the scene that we created was really good, because we showed how past experiences can change how we think and act in our present life. The scene was performed quite well because me and Robert were acting as the children the audience could see by the look on our faces that we were very scared of Kyle. I think Tejal did very well in this scene because she tried her best to stop me from looking at Kyle's dead body. Having Nav as our narrator/ conscience really helped because at the beginning he said the one line, which stuck out to the audience though out the performance, "the usual culprit", this is meant to mean that when things go wrong it comes down to alcohol. The group with Ricardo, Ashley, Nick and Becky was also very good it was very realistic. I think Ricardo was very good; he was acting as if he had just had a fit so he was excellent at getting the idea across to us with out over acting and not being stupid. Everyone was very mature and Becky even got him in to the correct position if it really was to happen. Ashley and nick just ran away when they noticed what had happened to Ricardo. The way that nick and Ashley reacted was good because it showed us the way they felt about a friend. But I could see that Nick wanted to go back and help. In week 6 we performed our conscience alley scenes ours was quite god because we had Nav still in the middle, while us three were around him. I think the best bit was when the three of us said "wait" after each other as we said it we got louder, because I was a the end I was the loudest. This was really good because we were giving a stronger image to the audience. Done by Sonia Kohli ...read more.