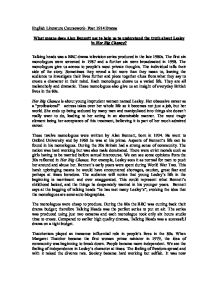 What means does Alan Bennett use to help us to understand the truth about Lesley in Her Big Chance?

English Literature Coursework- Post 1914 Drama What means does Alan Bennett use to help us to understand the truth about Lesley in Her Big Chance? Talking heads was a BBC drama television series produced in the late 1980s. The first six monologues were screened in 1987 and a further six were broadcasted in 1998. The monologues give us access to people's most private thoughts. The individual tells their side of the story. Sometimes they reveal a lot more than they mean to, leaving the audience to investigate their lives further and piece together clues from what they say to create a character in their mind. Each monologue shows us a varied life. They are all melancholy and dramatic. These monologues also give us an insight of everyday British lives in the 80s. Her Big Chance is about young imprudent women named Lesley. Her obsessive career as a "professional" actress takes over her whole life so it becomes not just a job, but her world. She ends up being seduced by many men and manipulated into things she doesn't really want to do, leading to her acting in an abominable manner. The most tragic element being her acceptance of this treatment, believing it is part of her much admired career. These twelve monologues were written by Alan Bennett, born in 1934. He went to Oxford University and by 1960 he was at his prime. Aspects of Bennett's life can be found in his monologues. During the 30s Britain had a strong sense of community. The nation was hard working but was also male dominated. There were strict morals such as girls having to be married before sexual intercourse. We can see some opinions from the 30s reflected in Her Big Chance. For example, Lesley sees it as normal for men to push her around and abuse her. Bennett's early years were spent during World War Two. ...read more.

Bennett is showing us here her stupidity. At the beginning of the monologue when she is talking about the party, she tells us that she's "glad I (she) did (went) because that's how I (she) got the audition" This just sums- up Lesley's ridiculously stupid personality. She has had a week to think this over and still, she doesn't understand that she was used and manipulated into acting in a pornographic film. The director Simon asked to see her in her "bra and panties" They forced her to apply sun-tan lotion while topless, and yet has failed to see the film for what it is. But why? I believe that Bennett is not just showing her stupidity here, but her almost identical personality with Travis. Travis goes around topless and draws male attention, Lesley sleeps with three men during the monologue. This is just one similarity. Travis is abused by men in the monologue, Lesley tells us that Travis was hit my her boyfriend "at an earlier junction" Lesley is always mistreated by men, by saying "you knew he was my boyfriend" because "at an earlier junction you'd see him hit me across the face" she is really telling us that in her eyes that's how men treat woman, and that it's a fact of life. Could Bennett be highlighting the problem of sexist men in the 80s and how Britain was male dominated? Being so like Travis means that all of this seems normal to Lesley. There was nothing suspicious about having to act someone sleeping around and filming sexual intercourse scenes. Lesley does this in real life, sleeps around. As the audience sees, Lesley is constantly manipulated and abused such as the comment from Scot "Let's face it, dear. You're not used to working. Why don't you bring you knitting?" and many other insults throughout the monologue. Lesley also tells us that "Travis is a good-time girl, although you never see me having a good time." ...read more.

the part" and " we wrapped about six" show audience that acting is part of Lesley's everyday life and is her only real interest. She explains what each term means. When she says "(that's film parlance for packed up) she is patronising and insulting the audiences intelligence. Her ability to be able to slip in these technical terms s also tells us she is very dedicated her career. Bennett then makes the audience see this is not the case. When Lesley is talking about her experience on crossroads, we can see that acting is not her main priority. She discusses toilet and food preparations. She then wonders why people don't give her serious parts. The truth is she is not a great actress people just say it to win her over. The audience find Lesley's over exaggerated terms such as "Thank you kind sir..." also quite amusing. This use of language clearly shows that Lesley does not get out much. This monologue has helped me understand more about the abuse everyday British women suffered in 1980s. By using these techniques, Bennett has revealed Lesley's darkest secrets and taught us her true personality. The dramatic opening shows the audience that women wanted to escape this treatment. They acted as if everything was fine and that they weren't being mistreated by men. Lesley's character is representing many British women at this time. We feel sorry for Lesley at first, but her stupidity turns us against her. The monologue is quite upsetting; the audience laugh at Lesley because of her pretentious use of language and over exaggerated terms as well as all the characters. Sometimes we can't help but feel sorry for her. It's when she shows little sign of regret we start loosing sympathy. Even a week later she still doesn't regret being part of this film. Bennett defiantly succeeded at showing us this. He does in a clever way; he doesn't quote these ideas in directly but adds a few hints in throughout the monologue. ...read more.