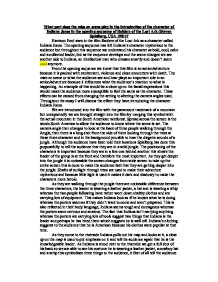 What part does the mise en scene play in the introduction of the character of Indiana Jones in the opening sequence of Raiders of the Lost Ark (Steven Spielberg, USA 1981)?

What part does the mise en scene play in the introduction of the character of Indiana Jones in the opening sequence of Raiders of the Lost Ark (Steven Spielberg, USA 1981)? Harrison Ford stars in the film Raiders of the Lost Ark as a character called Indiana Jones. The opening sequence has left Indiana's character mysterious to the audience but throughout this sequence we understand his character as bold, cool, calm and a collected leader, but as the sequence develops and the scene changes we see another side to Indiana, an intellectual man who dresses smartly and doesn't seem cool anymore. From the opening sequence we know that this film is an action/adventure because it is packed with excitement, violence and close encounters with death. The mise en scene or what the audience see and hear plays an important role in an action/adventure because it influences what the audience's reaction to what is happening. An example of this would be a close up on the facial expressions this would make the audience more susceptible to feel the same as the character. These effects can be caused from changing the setting to altering the camera angles used. Throughout the essay I will discuss the effect they have introducing the character Indiana Jones. We are introduced into the film with the paramount trademark of a mountain but unexpectedly we are brought straight into the film by merging this symbol with the actual mountain in the South American rainforest. ...read more.

Even at this point he isn't as the centre of the screen, it was when one of his followers tried to kill him there is a close up on his back of his head which allows the audience see him twitch and use his super alert hearing as he disarms his assassin with a whip. This is the pinnacle part of the opening sequence so far where Indiana is seen as almost a super hero that is shown as well by the orchestral music that is built up to a crescendo. This has been done to build up the atmosphere in the introduction of Indiana, when Indiana is finally presented to the audience; he is in the centre of the screen with close up of his face. Indiana comes out through the darkness to make the audience feel that he was mysterious but now he open to the audience. As they walk through the cave the lighting is very dark to make it seem mysterious and anything could happen which adds to the excitement and tension this makes the task ahead more daring and heroic. Indiana then tells the porter to stay away from the light, we know this is for the porter's safety, which tells us Indiana is experienced and is intelligent. Once they pass all the traps of which there are many they both come across the artefact, the porter simply thinks they have it but Indiana thinks otherwise, which reinforces Indiana's experience. ...read more.

Indiana in the jungle is wearing a leather jacket and a cowboy hat and is unshaven whereas in the University he is smart wearing a tie, glasses, a three piece suit and has his hair is combed over. In the jungle he seems much more cool and individual whereas in the University he seems a bit boring and when a girl has love you written across her eye lids and he looks at them he is centre and this gives emphasis on how nervous he is. This tells the audience he is an intellectual as well as an adventurer, this is important in the opening sequence because it shows two sides of Indiana that makes the film more appealing to both sexes. Mise en scene has played a major part into introducing the main character Indiana Jones. Steven Spielberg has introduced the character by the use of setting, the positioning of the actors, the costume, the lighting, the camera angles used and the music, all these parts have made Indiana's introduction a successful one. There may be all roles than may effect Indiana introduction a successful one because Harrison Ford was and still is a world wide known actor and has played many staring roles before hand which would already personify him as the main character. If it weren't for dim lighting or certain camera angles Indiana wouldn't have seemed such a heroic leader or a hansom lecturer. This shows that this opening sequence has played a major role in introducing Indiana Jones character. ...read more.