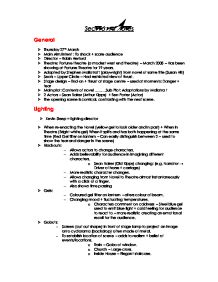 Sound > Rod Mead - sound director > CRITICAL ELEMENT OF SUCCESS > Series of recorded sounds: - Blood-curdling screams - Effective- Sudden - Scare and shock audience - Horses pulling cart heard before scream - Audience learns to associate this with impending scream - Adds to suspense - They know "scare" approaching - Can't work out when � Still scares > Can legitimise statement of location: - Graveyard - Sound of ravens - Noise associated to haunting and a scary location � Realistic for audience � Tension > Build-up to scary moment - Rocking chair sound - Prepares audience for a scare - Don't know when/what going to happen � Builds atmosphere � Hugely effective > Reference to Mr Bruce - Imaginary sound technician - Directors intention of audience being aware of play within a play - Brechtian technique > The music box was a beautiful tune, yet because of its relationship with a sudden action that causes fear, it was the most feared sound of all, so when it is repeated, the audience immediately sense fear. ...read more.